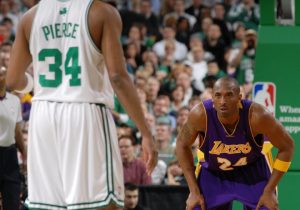 The classic basketball battle continues on February 10th, 2011 as we bring you the top NBA pick for tonight with this Lakers at Celtics prediction. The C’s took the first one as they took the match up at the Staples Center by storm capitalizing on LA’s poor display with a 109-96 win. Kobe Bryant was the only lively Laker in that particular match finishing the game with 41 points. But that was far from enough as Gasol, Fisher, Artest and Bynum all failed to contribute. Meanwhile, Rondo dished 15 assists, Pierce had 34 points while Ray was at his usual best hitting 4 threes and finishing with 20 points.

It was a great all-round performance by the Celtics, whereas Lakers were just a one-man team on that night. The big question which we try to answer in our Lakers at Celtics prediction, is what will be the case this time around? Will LA come out strong with a great sense of urgency, or will the guys in green sweep them in the regular season and take a huge step towards direct home-court advantage in case it goes to a repeat of last season’s Game 7 scenario. Paul Pierce is already having thoughts about such a possible outcome saying: “If we had home court last year, who knows maybe what happens in Game 7? We’re not looking ahead, but maybe if it comes down to another Game 7, maybe we’ll have it at home.”

So home-court advante in the 2011 NBA Playoffs is a big factor about this particular Lakers at Celtics prediction, because the bottom line is that these two teams are highly likely to meet at the Finals once again, cause they are that good. And at the current state of things, Celtics have a record of 38-13, while Lakers are sweating at 36-16. Phil Jackson will want his team to win this game at the Garden tonight, even the regular season series and get closer to Celtic’s record of wins/losses, in order to stay in contention for the home-court advantage going into the postseason. These are some really important things to consider and that’s what BetOnWins.com does as we bring you the top NBA pick for tonight.

Still though, Celtics have probably learned their lesson from last year showing how important it was to play strong during the regular season and have that decisive Game 7 being played at your court. Thus, a win against the Lakers tonight will give a direct advantage, and will inflict another loss on the Lakers. So the motivation will be super strong at their camp.

Going into this Lakers at Celtics prediction, a lot has been said about how banged up Doc Rivers’ team is right now, but truthfully I don’t really think that’s going to hurt them. They will be missing Shaq, who didn’t score a single point in the previous meeting in LA two weeks ago. Jermaine O’Neal has been missing for months now. Delonte West has not been a factor for them all season long. The Turk Semih Erden is perhaps the most noticable absentee as he has been fitting in well, but still Celtics got Kevin Garnett, Glen Davis and Kendrick Perkins locking the paint.

Lakers at Celtics Prediction: The Celtics will be looking to prove they have taken a point from last year’s experience and earn home-court advantage against the Lakers in case the two teams meet at the Finals again. Thus, they will be well motivated to take this game and sweep LA in the regular season series.

Boston Celtics to Win @ 1,71 on Money Line
BetOnWins.com’s official betting partner Bet365 offers a 100% bonus on your first deposit, so if you don’t have an account with them, and they are the best betting company as far as we know, make sure you TAKE ADVANTAGE!