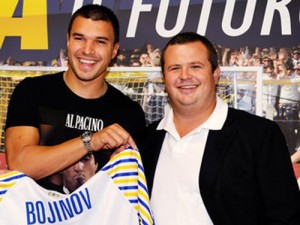 The last match of the 11th round of the Italian Seria A features Parma against Sampdoria. It’s a game between two sides that are on the exact opposite end of things. Samp has been playing some very effective football lately steadily climbing up the table without losing in their last 7 games. Meanwhile, the Parmalats have not won a single game in their last 9 outings!

Parma are rock bottom of the table having collected just 8 points from 10 matches. What’s even worse is that they have only a single win to their name so far this season. That’s because Parma is having problems scoring goals, but in defense they are pretty solid which is the reason why the have made 5 draws so far. The Parmalats have scored just 6 goals but that should change as they got Bojinov and Crespo.

Samp on the other hand have been quite solid since the start of this new campaign. They have managed 3 wins and the stunning 6 draws from 10 matches, similar to how Parma have done but their two additional wins allow them to have a much more respectful position in the standings as they are currently ranked 7th, 3 points behind Roma. So Samp are more or less on track, in fact it’s about time for them to lose a game. Sampdoria have not lost a single game in Italy since the 19th of September (0:1 vs Napoli) so they are on a run of 7 matches without a defeat.

Parma doesn’t deserve to be at the bottom of the table. They have more quality than their positions shows and our prediction is for them to win tonight’s match and get out of the relegation zone. A win tonight means they will have collected 11 points but with better goal difference will go in front of Cesena and Brescia as well thus they will surpass 4 teams in the standings which is definitely worth playing for!

The odds for Parma to win against Sampdoria are 2,30 and it’s a good pick to start climbing up the money ladder in your account. A good factor is that Samp’s most influential player Antonio Cassano won’t play. Samp will have to rely on Pazzini and Pozzi up front.

Parma v Sampdoria Prediction: Parma have not won in three months! Their only win was on the opening day of the season against Brescia on 19th of August! It’s about time for their luck to change. Plus, they are at the bottom of the table so should be extremely motivated for this game against a Samp side without Cassano.