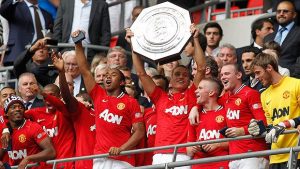 Finally, the new 2011/2012 Premier League season is about to kick off this weekend, and after a couple of long, hot and dull summer months, we are ready for action. BetOnWins.com is in the business of providing the most accurate sports betting picks, and we are glad to announce that we have some really good selections in store for you. Of course, the big question on everyone’s mind right now is who will win the title, and the favorites are obvious – Man United, Chelsea, Man City, Arsenal, perhaps even Liverpool and Tottenham can battle till the end.

But let’s get back to our football betting predictions for the 2011/12 Premier League opener on August 13th. The FA has a done a good job plotting up some great games to set off the new campaign in style. We expect plenty of goals and drama in this round.

Of course, what better way to start our list of accurate betting picks for the Premier League opening day than with the champions themsevels as the Red Devils play away against a tricky West Bromwich Albion side. Last season, West Brom did a little miracle coming back from 2-0 at Half Time at Old Trafford to end in a draw (2-2). Then, in the return game, the Reds won 1-2 thanks to a late goal (75th min) from Chicharito. So WBA know how to play well against their mighty oponent and even though this might look on paper like a done deal and a typical David and Goliath clash, we feel that it won’t be easy for Ferguson’s men to return with all 3 points.

United looked great against Man City in the Community Shield match as they made an incredible 2-0, 2-3 comeback in their traditional style. So now, the online sports betting companies such as bet365 are offering a lowly 1,50 price on them to win, which is not so bad if you wager a lot of money. However, out WBA v Man United prediction is for Both Teams to Score, which is offered at 1,83.

The Albions had a great second half of the 2010/11 season, and are lead by a great coach such as Roy Hodgson. The Baggies have a nice stadium with a capacity of 26,500 and you can be certain that these fans will be mad about the start of the season, and sh0uld give them home players a huge boost. Everyone knows about the talents posessed by Peter Odemwingie now, Mulumbu is also a fantastic player. Tchoyi scored a hattrick in their last friendly against Newcastle that ended 3-3, so they should be able to score at least one goal against the shaky-looking and unsettled De Gea.