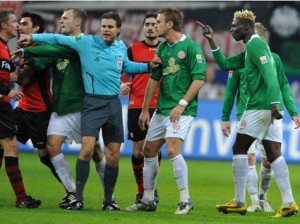 Two straight wins against top Bundesliga teams Dortmund and Hamburger have put Mainz 05 in safety as they are 16 points clear of the relegation zone with just 3 fixtures remaning including this one. Hence, Mainz 05 have nothing to worry about and have just pride left to play for right now and of course to please their home fans.

The situation is exactly the same for Eintracht Frankfurt as far as their league position is concerned as they are placed 9th with just a  point more than Mainz (45 to 44).

Mainz has a number of injury concerns to deal with as they will be missing Dimo Wache, Tim Hoogland, Jan Kirchhoff, Zsolt Loew and Elkin Soto.

BetOnWins Prediciton: Our prediction here is for Both Teams to Score as Mainz have done that in their last 7 matches! Mainz 05’s last 7 games have all been under 2.5 with only one of the side scoring thus we beleive this will change today! It will be over 2.5 and Goal/Goal!