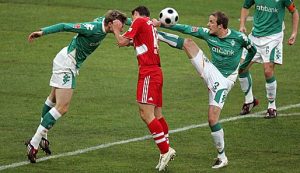 The DFB Cup Final is scheduled for 15th of May and looks like a mouth watering affair featuring two of the Bundesliga’s highest scoring teams. Werder Bremen take on Bayern Munich in a match that will decide who wins the German Cup.

Good news for both sides is that they had 7 full days to recover for this game. After Saturday’s 3-1 win against Hertha, Bayern were given a couple of days off to recuperate body and soul. Such days off usually act as a really good refreshment period for footballers as they normally get back on the pitch fully motivated and boosted both mentally and physically. Along with Jose’s Inter, Bayern are the only team in Europe fighting for treble as they have the chance to win their domestic league and cup, as well as the Champions League.

The DFB Cup Final is this time a one-legged affair , so everything will be decided tonight and this game will be played on a neutral ground. Werder are a goal scoring machine that’s at the same time quite vulnerable in defense. The interesting stat is that Werder Bremen scored the most goals in the Bundesliga this season, so they shouldn’t have a problem putting at least one past Bayern in this match.

Werder vs Bayern BetOnWins Prediction: Goals are to be expected in this game which features two of Germany’s free scoring teams. Werder Bremen have scored the most goals in the Bundesliga while Bayern are the classier side. Both Teams to Score at odds of 1.61 (betonwins.com)

15 May, DFB Cup Final Werder Bremen vs Bayern Munich Prediction added by betonwins on 05/10/10
View all posts by betonwins →