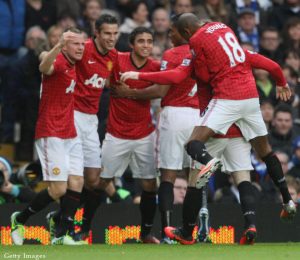 It’s an interesting round in the English Premier League, and we have prepared for you some betting picks of really high odds. United sit at the top of the table having collected 27 points from 11 matches, while City and Chelsea are trailing right behind with 25 and 24 points respectively. In London, Mark Hughes knows his job is on the line as QPR host Southampton.

United have had way too much luck lately turning games late and getting some refereeing decisions going their way, but that’s not something new for Britain’s richest club. But you can’t always have it your way. Luck eventually runs out. It always does. So we expect that United will fail to win here at Norwich, despite being heavily favored by fans and bookies to do so. They have not had a draw so far this season, and our prediction is they will make one today. Plus, United had difficulties against Norwich last season, where they won that same fixture by 1-2 thanks to a late, late injury time goal by Ryan Giggs, when the hosts really should have taken something out of that game.