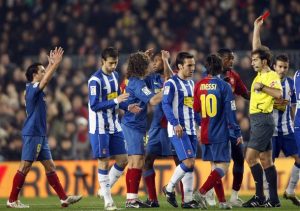 It’s about time for Barcelona to drop some points in La Liga so that the drama can return and Real Madrid be able to maintain some chances of winning the title. That’s why our prediction is a Hendicap 1:0 for Espanyol which practically means double chance.

This is one of most fearsome football rivalries and it’s never been easy for Barcelona. On top of that they are missing key players as Iniesta and Ibrahimovic are out for this one. Plus, Barca would be keeping an eye on their crucial Champions League against Inter just a couple of days later.

Here is what Guardiol had to say on the game, intelligently suggesting that it won’t be such an easy game for them as most people expect: “Against Barca, it’s their [Espanyol’s] match of the year,” said Guardiola. We have a number of very important games and they have basically one, this game. We know that Espanyol are very strong at home and they have won 80 per cent of their matches. They are a team that attacks very well. At home, they are one of the best teams in La Liga.”

BetOnWins Prediction: Double Chance – Espanyol or Draw is a football bet with a lot of value to it as bwin offers it at 3.24