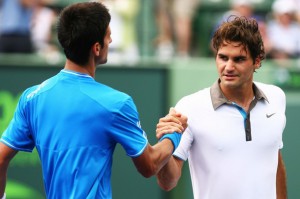 The 2011 French Open Semifinal gets underway tomorrow and we provide you our Federer vs Djokovic prediction. Betting companies are favoring the Serb to win this match and advance to the Final, which will most likely be against Nadal who plays Andy Murray in the other semi. However, we are making a bold betting prediction here as our money is on Federer to be the one who advances to a classic and much anticipated 2011 French Open Final against Nadal.

And what could be our reasons for this Federer vs Djokovic prediction? First and foremost, the value is definitely on Roger here as he is the underdog, although that’s extermely hard to explain or understand why given the fact he is probbaly the best tennis player ever. I mean, any time you have the chance of  betting on Federer or other individuals or even teams of similar quality, and betting companies like bet365 are offering you 3,50 for the win, you should go for it.

Another huge factor is that Djokovic won the last three meetings against the legendary Swiss, and you would expect that Roger has had enough of it. I don’t think we have ever seen Federer loosing four straight matches against any opponent.

Another important aspect of this particular tennis betting pick is that Djokovic actually advanced to this Semifinal thanks to his opponent in the previous round withdrawing, so the Serb didn’t even play and was awarded a 3-0 win. This has given him an extra couple of days off, so the bookies expect him to be fresher and more energetic going into this game. However, this could also be a double-edged sword, because it’s very important in major tournaments like Roland Garos to maintain your rythm by playing once every two days. This rythm has now been broken for the Serb and he might be a bit out of synch here. On the other hand, Roger has been in constant form so far, he has been playing well and has won all his matches 3-0, so it’s not like he will be super tired or anything.

Federer vs Djokovic Prediction: Our last major factor is that Djokovic has now won 41 games in a row, which is something incredible in the modern era of the sport. In fact, if he wins against Roger he will set an all-time record for most consecutive wins at the start of the season. If there is a player who can stop his run, that’s got to be Federer!