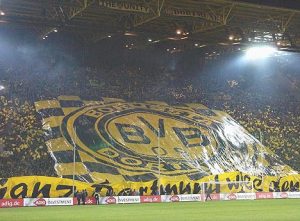 Another great money-making opportunity is presented by our Borussia Dortmund v Bayer Leverkusen prediction in the last match of the opening round of the German Bundesliga. Both teams have high ambitions this year and we will certainly watch a big spectacle at the Signal Iduana Park stadium when the game kicks of at 17:30 CET.

Leverkusen are coached by Jupp Jeynckes and during the summer their big transfer was bringing back Michael Ballack from Chelsea. The German midfielder is doubtful for this game though as he is still nursing an injury. However, he is in the group of players called up and will certainly be on the bench if he doesn’t make the starting 11. Leverkusen already got their season officially started with a convincing 3-0 win against SC Tavriya in the Europa League playoff. However, this win also produced a lot of casualties for the side which is an important piece in our Dortmund v Leverkusen prediction.

Leverkusen will travel to Dortmund without their frontman Patrick Helmes who picked up a calf injury and is expected to miss the next two weeks. Lars Bender also suffered a bruised calf in this same match and won’t be available for selection. The loss of Helmes is particularly significant as he was having a great pre-season so that certainly influences our Dortmund vs Leverkusen prediction. Up front, Jupp Heynckes is expected to rely on Eren Derdiyok and Stefan Kiesling.

The home factor is very important in this Borussia Dortmund v  Bayer Leverkusen prediction because the Signal Iduana Park stadium has a capacity of over 80,000 and you can bet it will packed on the 21st of August. Dortmund started this season with two strong displays in the Europa League and domestic Cup. They are a side constructed of young players which mix fast pace with dedication and great technical level. That should result in a high scoring game and both teams will find the back of the net at least once.

Borussia Dortmund v Bayer Leverkusen Prediction: The best tip for this game is Draw. Dortmund are favorites to win as they have a good team playing at home, but Leverkusen despite all their squad problems are still a formidable opposition that will cause problems.