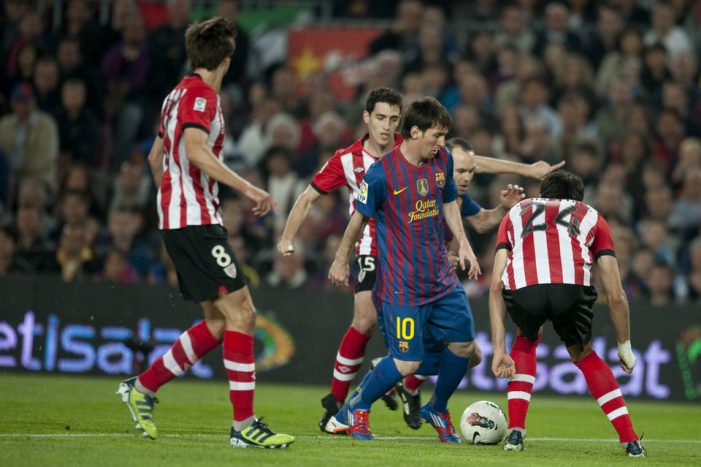 The Final of the Spanish Coppa del Rey between Athletic Bilbao and Barcelona is about to be played tonight in Madrid. However, the match was originally scheduled to be played at Santiago Bernaebu since it has the largest capacity, but once it was known that Barcelona will play in the final, Real’s management declared that it would not be possible for them to host the final, because they were renovating the lockers, and the pitch. That was their way of saying – “we don’t want to see Barca fans triumphing on our stadium”. So now, the game will be played at Atletico Madrid’s Vicente Calderon which has a decent capacity of 52,000.

Barcelona has a long list of injured players for this game. As we all know, David Villa has been out with a broken leg for six months now, and he won’t make it for the 2012 European Finals. The problem at the back appears to be deeper though, as Daniel Alves has a broken collarbone and misses out. Abidal is currently recovering from a liver transplant. Puyol is also out with a knee injury. That should at least allow for Bilbao to score a goal in this final, so the Goal/Goal bet for this game @ 1.80 appears to be a feasible option if you are wagering with a lot of moeny.

Nonetheless, our money is on Bilbao to lift their first trophy since 1985. They were disappointed in the Europa League where they lost the final to Atletico Madrid, so now they have another shot at finally getting some silverware. Of course, the odds are stacked against them, but that means will make a lot of money if they manage to get it. The game could go into Extra Time and the Draw is priced at 6.00.

Basically, the pick we suggest here is on Bilbao “To Lift the Trophy”, which bet365 offers at 5.00. It does not matter whether they win in regular time, or score in Extra Time, or need penalties to triumph. That’s the beauty of that bet, and our money is on it.