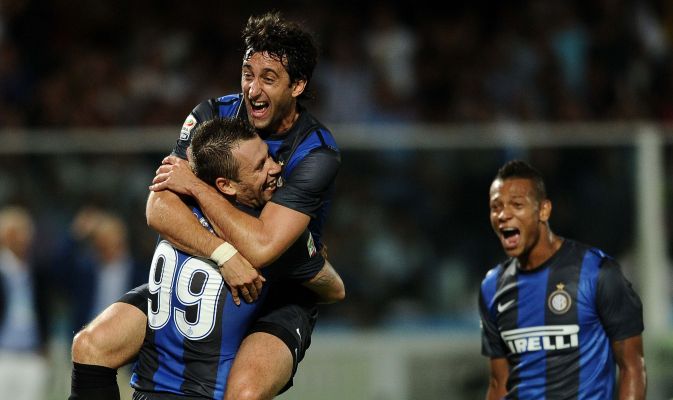 The biggest derby in Italian football is coming up tonight, and that’s what our top football betting pick for today is – the most accurate football prediction for Juve v Inter on November 3rd, 2012. Juventus have been on an amazing run of 49 consecutive matches without a defeat in the Seria A. Could the Nerazzurri put an end to it? The bookmakers don’t seem to think so, as the Bianconeri are rated as heavy favorites. Yet, we all know that form and league position count for nothing in such derbies.

The Nerrazzurri have been on a winning run of their own, albeit far from Juve’s impressive sequence. Under Stramaccioni, Inter have won their last 8 matches, and are just 4 points adrift, so it could be said that they are involved in the title race this year. If they can get some points in Turin, they will confirm their ambitions.
Meanwhile, the hosts are on a remarkable run of 49 straight games without a defeat, and if they manage to continue it against Inter tonight, they will reach the 50 mark and put pressure on Milan’s record of 58 games.

Juve do have the credentials necessary to explode on a big scene like that. Andrea Pirlo, who is actually a product of Inter’s youth system, is going through a real renaissance period orchestrating the entire midfield and even scoring goals. In combo with the lively Arturo Vidal and Marchisio, Juve have a great midfield that can cause any team trouble.

Meanwhile, the aces that Inter have up their sleeve are their are their three main defensive system in combo with the impressive form of Milito and Cassano. The latter has literally made headlines ever since switching jerseys in Milano. Cassano is contributing in each game he plays, in fact he was not so good in his prime time at Roma, followed by a spell at Real Madrid. It seems he has finally matured and can now really sacrifice himself in the name of the team.

Obviously, in order for us to bring you the most accurate football prediction for today, we have to take into account the missing players, and more importantly, how their absence will be felt on the pitch. Inter’s main miss is Wesley Sneijder. Antonio Conte practically has a fully fit squad to choose from.

Truth is that records come to an end at some point, but what are the odds of that happening tonight? We have the answer to that most important football prediction for November 3rd.