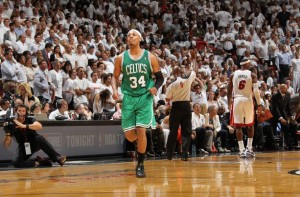 The long wait is finally over as the new NBA season is about to get underway with this Celtics at Heat prediction on October 30th, 2012. What better way to tip off the season than with perhaps the hottest basketball rivalry right now. These two teams reached a crucial Game 7 in their Eastern Conference Finals battle just five months ago. LeBron and Co prevailed, and now they will be lifting the champions banner and get their rings in front of a revenge-hungry Celtics team. Things will certainly get really interesting on the floor at the Americans Airlines Arena – that’s one of the best Celtics at Heat predictions for October 30th.

It’s our prime focus to bring the most accurate NBA betting predictions to people worldwide. Our track record speaks for itself, and you can check our history here, to see just how many picks we’ve had correct over the past three years. The online betting companies are heavily favoring the Heat to win their season opener as the odds on them are just around 1.33 on Money Line (no handicaps). Yet, that might not be such an easy task to accomplish. Despite the advanced age of some of their key players, Boston will still be among the best teams in the league for the 2012/13 season. No one will have it easy against them.

If You Can’t Beat Them – Join Them 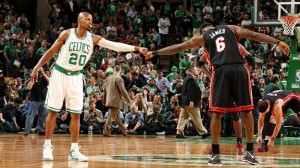 By now, everyone knows the story of Ray Allen’s decision to take a serious pay-cut in order to boost his chances of winning a second NBA title by teaming up with the Heat. Some might criticize him, but at least in my opinion, Ray-Ray as with any other person on this planet, has the right to decide on his own future. He wants to win another title, and there is nothing wrong with that. Allen did the math and realized their “Big THREE” version’s time was up. They are not getting any younger and they missed their major chances already, mainly because of injuries to key men in crucial moments but thats another story. They certainly are a solid group and have slightly improved on their roster this year by bringing in Jason Terry, Courtney Lee, while the returning Bradley and Jeff Green can practically be viewed as new signings considering how much time they’ve been out. But the real problem is that the NBA is generally a young-men’s type of league while KG and Paul Pierce’s best years are way behind them. Simply put, they are no match for Miami, Lakers or OKC even if Allen had stayed.

Yeah, it’s a bit of a hit for Boston fans to see on of their favorites join their biggest rival in recent years, but that’s the reality of the NBA game right now. Loyalty is close to none. It’s either about money or about the rings (personal legacy). You have to give Allen credit for being title-hungry rather than greedy for cash. As a comparison, the latest reports suggest that James Harden rejected a $52 million offer from the Thunder franchise, because the Rockets were giving him $8 millions more in the course of the next four years, but his chances of winning a title there are practically none, while OKC were and should still be one of the top title contenders.

Bottom line is that Ray Allen will play a crucial role in this Boston at Miami prediction for the NBA season opener on October 30th. The Celtics might know everything about him, but Allen is the type of player that raises his game on such big occasions, likes these challenges and will be eager to prove a point to Rondo in particular. He knows he is a perfect fit for the Heat system, because he is a spot-up shooter and he will have plenty of chances for wide open shots every time Wade or LeBron get double-teamed.

But there is also no denying the fact that this particular 2012-13 NBA season opener between Boston and Miami will be quite the awkward moment for Allen. His past colliding with his future. His very first game in a Heat uniform against his former teammates with whom he spent the past four years. The Miami players would be raising the banner and getting their rings, while he will be out there standing and just watching them just like the entire Celtics team. One of the best Celtics v Heat predictions for October 30 is that this would be a moment you wouldn’t want to miss out on.

Here is how Ray Allen sees it: “We can move on. I think it’s two-fold, having a ring ceremony and then playing Boston. It’s like both situations, letting go of what happened last year and moving forward. They’re repeating, but I’m on the quest for a championship. That’s a challenge that we’re all facing together.”

Jeff Green Could Be The X-Factor 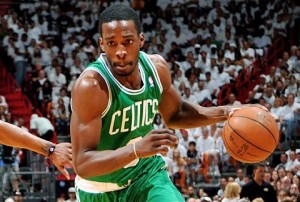 One the best Celtics at Heat betting picks for October 30, 2012 is that Jeff Green would be the X-factor. Green will practically be like a new signing for Doc Rivers, because he missed the entire past season due to a heart surgery he had to undergo. He is back now, and looks better then ever. He was actually the C’s most solid contributor during the preseason. Our prediction is that he will bring this good form to the regular season as well, and that will help him turn into one of the main players for Boston.

NBA Season Opener, Celtics at Heat Prediction: To get our betting pick for this game, register here.