8 May, Sevilla vs Barcelona Prediction And Betting Tips 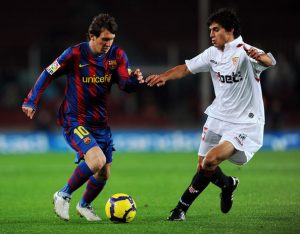 With just two games left in the 2009-10 La Liga season, Sevilla hosts Barcelona in what will most likely turn out to be the title decider. With Real Madrid breathing down their neck, Barca must overcome the Andalusians in order to remain on top.

Since Antonio Alvarez was appointed as Sevilla’s head coach, the team has seriously improved its form and slow but surely climbed up the table. Sevilla will be just as motivated as Barca for this game because they are fighting for the last Champions League spot. They are currently 4th but have just one point more than Mallorca. Their level of play has improved tremendously as they are now back to their attractive style scoring 20 goals in their last 7 matches, which is a league recrod right now.

There are few teams in the world capable of beating Barcelona and Sevilla is among them, which is one of the reasons why our Sevilla vs Barcelona prediction is for a double chance on the home side. As a matter of fact, they already managed to beat them this season and it happened on Camp Nou in Copa Del Rey game which ended 1-2. The Andalusians are coming of a 5-1 away win at  Racing Santander so their confidence is certainly on a high.

Of course, it’s very important for this Sevilla vs Barcelona prediction to consider the status of both squads. Antonio Alvarez has some problems in defense as Sergio Sanchez, Cala, Dragutinovic and Fernando Navarro are out through injuries. The midfield line is also problematic as Perotti and Duscher are sidelined. However, Sevilla still has plenty of high quality players especially in attack with Adriano, Jesus Navas, Renato, Capel, Negredo, Kanoute.

BetOnWins Sevilla vs Barcelona Prediction:It’s highly likely that Barca will drop points in Andalusia so our free betting tip for you is to bet on Handicap 1:0 for Sevilla. Another betting tip for this game is to go for Over 2.5!

8 May, Sevilla vs Barcelona Prediction And Betting Tips added by betonwins on 05/7/10
View all posts by betonwins →