2010 NBA Finals: A Ray Of Light Is Sparkling In Boston… 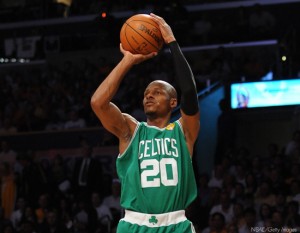 Ray Allen is a big time player, a future Hall Of Famer that will go down in the history of the game as one of the greatest shooters of all time. He added another chapter to his legacy in Game 2 against the Lakers hitting 8 3-pointers, more than anyone in the history of the NBA Finals. But this extraordinary performance is just another day at the office for one of the cleanest in terms of playing style, most established and complete players in the league right now.

Walter Ray Allen was born on 20th of July, 1975 in California. Three pointers are his specialty ever since his college days playing for the University of Connecticut (1993-96) where he set the record for the only player to have scored over 1,000 points in his sophomore year. He was the Huskies’ leading scorer as he made 118 3-pointers in 273 attempts.

Now, about 15 years later, Ray Allen is at the peak of his game and keeps on making basketball history. He is now the All-Time leader for most 3-pointers made in an NBA Finals game with the 8 jewels he dropped in a what was a vital road win for the Celtics in Game 2 to even the series 1-1.

The interesting about Allen’s career is that he was originally drafted by the Minnesota Timberwolves with the 5th pick in the 1996 NBA Draft. But immediately after this selection, Allen got traded to Milwaukee Bucks along with Andrew Lang for Stephon Marbury who went on to form a dynamic duo with none other but Kevin Garnett. Allen had 7 good seasons with the Bucks and at one point they had the a pretty decent team with Sam Cassel and Glen “Big Dog” Robinson losing in the 2001 Eastern Conference Finals to Philadelphia 76ers in Game 7.

During the 2002-03 regular season, Allen was traded the Seattle Supersonics in exchange for Gary Payton. Playing alongside Rashard Lewis, Ray Ray lead the Sonics to the Western Conference Semifinals in 2005. After the 2004-05 season, Sugar Ray signed a brand new 5-year deal with the Sonics worth $80 million. His game picked up accordingly and he went on to average 26.4 ppg in 2006-07 along with 4.5 rebounds and 4.1 assists.

This 2007-08 NBA season was an awkward one for Allen as he did post career-high 54 points in an overtime win against Utah Jazz, but shortly after he had surgery on both ankles that made him miss the remainder of the campaign. At the end of the season, Ray Allen was traded to the Boston Celtics in exchange for Wally Szczerbiak, Delonte West, and Jeff Green who was the 5th overall pick that year.

In 2008, Ray Allen got the NBA Championship ring he deserved to culminate his basketball career and turn from one of the best players into a real legend in the making. It’s interesting to note that in the final Game 6 against the Lakers back then, he equaled the record for the most 3-pointers in an NBA Finals game with 7, but broke the record for most 3 pointers made in a Finals series with 22 surpassing Dan Majerle and Derek Harper who had 17.

In 2010, history is repeating itself but now Ray is doing an even better job. He scored 8 3-pointers in a thrilling Game 2 at the Staples Center as the Celtics won 102-94 to steal home court advantage as the series moves to Boston for the next 3 games. Ray Ray had 7 3-pointers in the first half which he finished with 27 points! Even more impressive was the way Allen made those shots. They say a picture is worth a thousand words, well if that’s true then this slow-mo video bellow is probably worth millions: