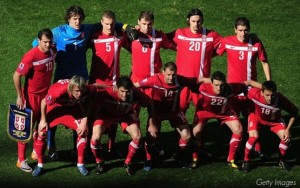 Serbia have on the most talented squads in the entire World Cup with top players in their ranks like Dejan Stankovic, Kuzmanovic, Kolarov, Vidic, Ivanovic, Zigic, Tosic, Krasic, Pantelic, Lazovic. All of these players are from some of the best clubs in Europe, like Stankovic who plays for European Treble winners Inter, Ivanovic from Chelsea, Kolarov from Lazio, Kuzmanovic from Fiorentina, Vidic from Manchester United, Pantelic from Ajax, Lazovic – PSV, Tosic – Man Utd, Zigic – Valencina.

As you can see, the Serbs have a great group of footballers, all playing for major clubs which is really important when making World Cup predictions. Australia on the other hand are a nice side with a lot of positive energy about it, some good players from the English Premier League, but they just don’t have the firepower yet to compete with such experienced teams as those from the Mondial.

That’s why our Australia vs Serbia prediction is for a win for the Europeans who need those 3 points in order to qualify. A victory tonight will ensure the Serbs progress, so expect them to be totally fired up for this contest. Australia on the other hand have absolutely nothing to play for, plus they are having some conflicts within their squad right now, particularly Harry Kewel who went on to criticize the press for making up negative stories about them.

The motivation factor plays a huge role in the accurate Australia vs Serbia Prediction, and it’s definitely in favor of the Europeans. Besides that, Seriba has the better players and are feeling really confident after beating none other than Germany. Australia should be a much easier challenge for Antic’s men.

Australia vs Serbia Prediction: Bet On Seriba to Win this game and guarantee qualification for the last 16. They simply are the better team with the better players which will also be much more motivated than their opponents. Everything points towards a win for the Serbs and you can literally double your money here as the odds for them are 2,00.