Barcelona Travel to Milano By Bus Due to the Volcanic Cloud 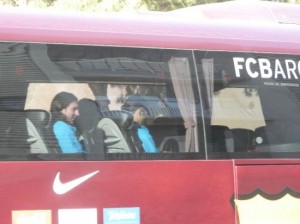 Due to the volcanic ashes that have covered most of Europe, the entire Barcelona team and staff will have to travel to Milano for the crucial semi-final game by bus. Barca started their long trip yesterday and it looks like it’s going to be a long trip to Milan because the distance between the two cities is over 1,000 kilometers.

They were hoping to fly to Italy or at least to an airpot nearby but with most of Europe’s airspace currently being shutdown, they are now traveling by coach.

Barcelona started their long journey in two buses heading to Cannes (634 km away) where they arrived yesterday, stayed overnight. Today they have to cover the remaining 351 kilometers from Cannes to Milan.

A though journey like that is certain to drain the powers of their squad who are having troubles anway as they failed to beat Espanyon over the weekend. Now they won’t have the necessary recovery to match up against a very physical Inter side who has been preparing for this game since Friday when they managed to beat Juventus.

Without a doubt, this 16 hour long bus trip will drain out even further Barca’s squad and definitely tighten their nerves before the game. Inter players on the other hand are patiently waiting for them to come at the San Siro tomorrow.