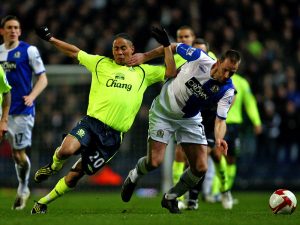 Blackburn managed to hold Champions Man Utd to a goalless draw in their last game and have now gone 6 straight games without a defeat in the English Premier League, which is almost incredible for them.

Everton on the other hand are breathing down Aston Villa’s neck as they are making a late push for European places. They got plenty of talent in attack with players like Pienaar, Osman, Chaill, Saha, Yakubu, always looking to score. There is no doubt that Everton is the better side in this contest. Everton have 3 STRAIGTH DRAWS so drawing today looks almost impossible. Missing for Everton are Arteta and Fellaini.

It’s highly likely Everton will win this game, but betting on Both teams to Score is the better option because Blackburn haven’t scored a single goal for two straight games, and they are hosts today. There hasn’t been a Goal/Goal between those two teams for 3 games in a row so it’s about time for this trend to stop.

BetOnWins Prediction: Both Teams to Score at bwin – 1.85