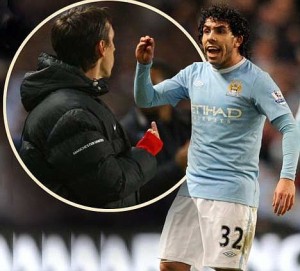 There are tons of things that can be said about the upcoming Manchester derby, but here at BetOnWins, we like to focus on giving you free football picks that are not only free, but quite accurate as well. With that in mind, what can be said for certain about the Man City – Man Utd game? Well for one it’s going to be a really intense game, full of emotions, lots of crowd noise and an awful lot of running from all players.

Both teams have everything to play for. The local rivalry is just one of the factors that’s gonna make that match a goal thriller. If United fail to win this game, there title chances ,who look slim already, will be totally gone. They will going be all out for this game, however there are question marks over the availability of three of their starters – Wayne Rooney, Rio Ferdinand and Ryan Giggs. But things like that are normal before big games. These are just mind games and as it usually turns out, the tops players will eventually make it into the lineup by some “medical miracle” just like Rooney was a starter in the 2nd leg against Bayern Munich. I expect both Rio and Rooney to play and with Wayne in the lineup, goals are guaranteed for Man United.

The situation at their local neighbors is slightly better. Their Champions League hopes hang on this game so you can absolutely certain that they will be on their heels from the first whistle. It’s interesting to point that out that City won 4 of their last 7 games at home against United. Mancini’s team have also scored the impressive 14 goals in their last 3 games. If these numbers are anything to go by, then Man City shouldn’t have  a problem scoring at least once here.

Our Pick: Bet on Both Teams to Score in this game. Bwin is offering 1.6 for this odd. So if for example you bet $100 on this Goal/Goal, you will get $160. But if your bank is lower then you can combine this bet with others. Check some of out the other free football picks we have for today.