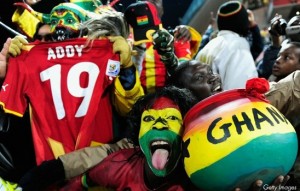 Uruguay will battle Ghana for a place in the 2010 World Cup Semi Final. The Black Stars are the only African country left in the competition, so with an entire continent behind them, it’s no wonder why we favor them in our Uruguay vs Ghana Prediction. Both sides have exceeded expectations so far and have been quite impressive as they made their way into the Last 8, thus it’s safe to say we are up for an even encounter that will be decided by the little difference that usually make a big difference in football predictions.

In order to come up with the most accurate Uruguay vs Ghana prediction, one must account for the history of both nations. The South Americans have a rich history of World Cup success, as they were in fact the first time winners of the Mondial. However, the last time they reached the Semis was way back in 1970, so we are talking about a 40-year long drought.Ghana on the other hand is in completely unfamiliar territory right now as that’s the first time they’ve made it beyond the Last 16. Ghana though can make history by becoming the first ever African side to reach the Last 4 at a World Cup! That’s in fact the foundation of our Uruguay vs Ghana prediction as we tip the Black Stars to proceed. 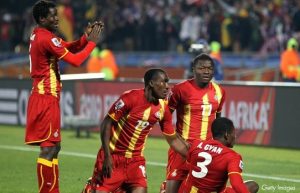 The interesting thing is that Ghana won the last Under-20 World Cup back in January, becoming the first African nation to do, so they are becoming accustomed to breaking boundaries and making history. The really experienced football tipsters knew all along that an African nation is going to do something big in South Africa this year and now that only Ghana is left in the tournament, there are no doubts as to which country could that be.

Ghana are playing a very modern form of football and physically they are probably the best side in the World Cup right now. All their players are strong, powerful and capable of running all night long without stopping. They are coach by the Serbian Milovan Rajevac who had the following to say: “If we make it into the last four teams in the World Cup, it would be the first time for an African nation. Can it be more motivating than that?”

Motivation is another key factor in this Uruguay vs Ghana prediction, and judging from Rajevic’s words, the Ghanaians will be fired up for this contest knowing that the entire African continent is behind them as they take on Uruguay. The best thing about the Black Stars is the fact they are the youngest team among those 8 left in the World Cup right now. Such young talents are more motivated and dedicated than the already established stars of Brazil, Argentina and Spain.

Andre Ayew who was a captain of the U-20 World Cup-winning side explained the following: “I think this is one of the best decisions the coach took: to mix such players, the older ones and the very young ones. You have the energy of the younger ones and you have the experience from the older ones.”

However, in order for us to be unbiased in our Uruguay vs Ghana prediction, we can’t write off the South Americans’ chances. They have the deadliest attacking duo in the tournament so far as Forlan and Suazo have scored 3 goals each. Uruguay have scored the most goals in the World Cup with a total of 10! Ghana on the other hand have scored just 1 goal from free play! Uruguay also has Edison Cavani in their front and the Palermo striker who is yet to open his scoring account can be quite dangerous if left unchecked. Uruguay are two-times World Cup winners so tradition is another factor to their advantage. They have a super talented group of players, fast and skillful like all South Americans, but it’s the attacking department that has been the key to their success so far.

Uruguay vs Ghana Prediction: The safest betting pick for this game is to bet on Both Teams to Score At 2,25! In terms of who will proceed to the semis, we pick Ghana to qualify at 3,20! Whatever you decide, remember that our official betting partner offers a 20 euro free bet.