Wesley Sneijder Aiming To Win the Champions League At Bernabeu 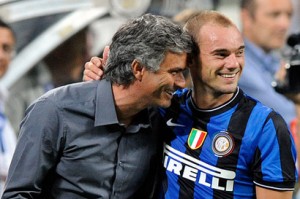 In an interview for UEFA.com, Internazionale’s playmaker Wesley Sneijder admitted he would be feeling on top of the world should his side goes on to win the Champion League at the stadium of his x-club Real Madrid. It does appear that destiny is on Inter’s side this time around as now Barcelona had to go through an exhausting 16-hour long trip to Milano by bus due to the volcanic eruptions in Iceland.

Here is what Wesley had to say for UEFA.com: “Yes, it would be nice to play there and win the cup – a great moment. It became my dream once I went to Inter, as I knew the final was at the Bernabéu. I was dreaming about reaching the final and lifting the cup. We’re just two games away now, so let’s go for it. Nothing is impossible.”

On his personal responsibility as Inter’s creative player in midfield and the battle against the world’s most feared football side Wesley said the following: “Well, yes, I have heard about Messi, I think at the moment he’s the best player in the world, but of course there is a way to stop him. Why not? We will find out next week. I have realised that I am one of the big players in the team, and I hope to be that until the end of the season” – which starts now.”

Then the Dutch went on to define his relationship with Jose Mourinho: “I think he’s a fantastic trainer. He knows exactly how to manage both on an individual level and for the whole team. That’s why I’m not scared about the semi-final. He will give us information nobody else can give us. That is the power of Mourinho.”