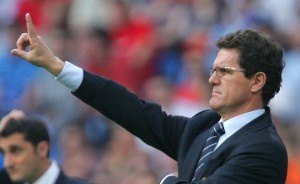 England takes on Spain at Wembley tonight, and despite the fact that the visitors are way ahead in terms of squad quality and depth, we feel that the islanders will put on a good show and get something out of this game. Of course, everyone knows that Spain is the better side as England does not have such creative and talented players which La Furia has and produces in abundance. We are talking about talents like Iniesta, Xavi, Alonso, Cesc, Silva, Cazorla, Villa, Pedro, etc. You get the picture. At the same time, England will be playing all their friendly games from now on (till Euro 2012) without Wayne Rooney as Capello wants to prepare his side for life without their main star as he will miss out the group stage, because of the red card he got against Montenegro.

So it’s easy to understand just way both fans, experts and online football betting companies are favoring Spain in this game. The odds on them to beat England are stacked at 1,80, while England cam be backed up at 5,00! Now, we all know that’s a friendly game, so it won’t do too that much harm to Spain if they lose. They have won everything lately, and you got to taste defeat sometimes, so what better moment than a meaningless friendly. And yet, this game means much more to England for one big reason.

Today is the so called Memorial Day in England, in which they pay respect to their heroes from World Ward One. Frank Lampard who has been in good form lately will lead the team as captain. And interesting stat about this betting pick is that England have lost their last three fixtures against Spain. If they lose this particular match, it will mark the first time they’ve lost four straight games against a single opponent since a defeat to Brazil in May 1976.

England v Spain Prediction: This friendly match means more to England as they would like to commemorate on their lost heroes, so a win against the reigning Euro and World Champions would be the ideal way.