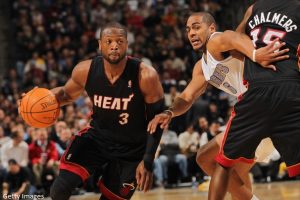 Miami Heat have now lost two straight games in overtime. They should have and could have won both, however, they let a 17-point lead slip in the 3rd quarter against Golden State Warriors, and then Lebron and Wade missed nearly half of their free throws to keep Clippers in the game, ultimately costing them the win. So Pat Riley’s men will be super charged up for this one, as they can’t afford to lose three in a row, especially given how they lost the previous two.

Denver Nuggets will be without two of the best players due to the lockout, which made Kenyon Martin and J.R. Smith decide to play in China, and as per their contracts, they are not allowed to return until next season. Still though, the Nuggets have a decent and pretty deep squad that must be respected. Ty Lawson is shaping up as one of the best point guards in the league. He is certainly the fastest one. Nene is an All Star center, and Danilo Galinari is one of the best small forwards. Andre Miller who came in as part of the trade that sent Raymond Felton to Portland, along with Harrington provide the spark from the bench.

The bad side for Miami is that they will be playing their third game in four nights, and the last two needed overtime to be decided, so that could have tired them, and we know Denver are a fast, run and gun type of team that plays with a lot of energy. There is risk in betting on Miami here, but we still predict they will come through.

These are the two highest scoring teams in the NBA right now with Heat at the top scoring 106.4 ppg, while Nuggets are second with 104.7. So it’s normal to expect a high scoring game, which is why the bookies have set the bar pretty high here with the Under/Over line for the Total Points set to 210.5. They have simply summed up the average points they score per game, to come with that line. Anyway, it should be Over 210.5 points, but our main pick here is for Miami to win.

Heat at Nuggets Prediction: Should be a very fun game to watch, Over 210.5 points, ending in a difficult win for Miami. LeBron and Wade should be really charged up to get a win after their two unfortunate defeats in OT.