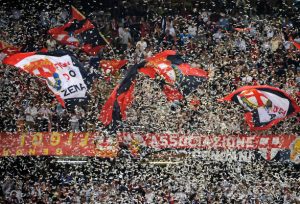 Genoa is playing away at Parma and the incredible thing about this game is that the visitors still don’t have an Away Win this year. It will be an interesting mid-table battle as Parma and Genoa currently occupy 8th and 10th spot respectively.

After making a run of good results, the Parmalats are now certain of staying in the Italian top flight for next year but now their ambitions have grown bigger as they would also try to make a late push for Europa League qualification, even though it looks like this might not be their cup of tea. Their goal at the start of the season was to remain in Seria A and now they have achieved it. Parma have lost just three times at home this season where they also managed to beat AC Milan.

Parma’s head coach is in for some troubles today as there are a lot of players missing for them. Biabiany and Valiani are out with suspensions. Paloschi (a really good forward on loan from Milan) and Zenoni are unavailable while  Dzemaili, Mirante, Lunardini, Paci and Lucarelli are all under question.

Genoa on the other hand took part in Europe League this season and if they beath Parma today, they will not only surpass them in the standings but breath in life in their chances for Euro football next year. What’s incredible about Genoa is that are going through a bad period even though they have some fantastic players. Milanetto was their best player in their last game – a 1-0 defeat in the local derby against Sampdoria. In that game Milanetto was the driving force behind their most interesting attacks and he will be looking to pull the strings in midfield once again. The other main really good players for Genoa are Palacio (came from Boca Juniors), Acquafresca, Palladino, Moretti, Mesto, Amelia (top goalkeeper) and Zapater.

Genoa have failed to win for 5 games in a row. Their was win though was quite impressive as it was a 5:3 victory against Cagliari. On the road is where they haven’t all year long which makes this pick one of the best football predictions for the day. Here is a list of all their 15 Away games in 2010:

BetOnWins Football Prediction: Statistics like are very important when making football predictions. It’s almost unreal that a good team with some top players like Genoa has failed to win away from home all year long. That’s why we feel that it’s their time to win now and the odds for that are very good! Bwin offers odds of 3.2 for Genoa to win!