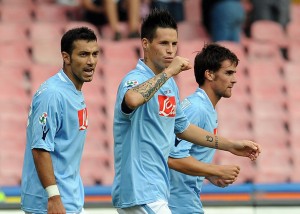 Bari are one of the few clubs in Seria A with absolutely nothing to playf or between now and the end of the campaign. Sports betting tipsters were saying they will fight to avoid relegation this season, however it turned out not to the case. Bari are a strong side that s now comfortable sitting on 11th spot with 43 points from 34 matches.

Napoli are also going through a very good season although their goals at the start were higher due to the fact they posses a lot of talen in all lines. Last weekend Napoli lost at home, something that rarely happens, and worst of all they lost to Parm after leading at the break! In their previous game they managed only a draw against a troubled Lazio side. What’s even more bizzare is that Napoli have failed to win Away from home since 24th of January, 2010. Here is a list of their last 13 matches:

Napoli will be super motivated for this game as they are just 2 points from Europe League places and 5 points behind the 4th place which gives rights for Champions League football next year. Bad news for them is that Quagliarella, Aronica and Cannavaro are suspended.

But Bari have much bigger problems with their squad. Bari has the following players out: Donda, Kutuzov, Ranocchia, Langella, Almiron, Donati, Kamata, Rivas, Meggiorini and Pisano.

BetOnWins Prediction: Napoli to snatch a difficult Away Win against Bari and we continue our record of accurate football picks. It won’t be easy but the odds are worth it. You can double your money at Bwin by betting on Napoli at 2.3! This is one of the best free football picks you will ever get.