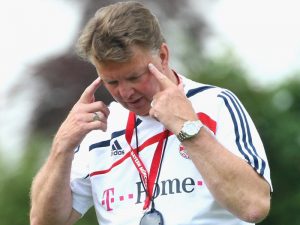 Bayern Munich are busy laying the foundations for the Champions League Final thus their minds won’t be entirely focused on this Bundesliga fixture against a weaker oponent as their city rivals  – Borussia M’gladbach.

A win here will almost certainly guarantee the title for the Bavarians and yet we believe it’s a bit too early for things like that. Bayern Munich will drop points here. There are just 3 days left till the crucial Champions League semi-final against Lyon where they will be missing Frank Ribery so they might not go on 100% in this game.

Gladbach have their place in the Bundesliga absoutely secured for next season so there won’t be any pressure on them here. They will just be super motivated to bring some joy to their fans as that’s the biggest game of their season and it’s already a sell0out with over 54,000 fans that will be shouting from the stands.

Here is what Van Gaal said to the club website:”“I now know that every team switches things around against us! t’ll be very hard work. Gladbach are having a very good season, so we’ll need a peak performance yet again.”

BetOnWins Prediction: Bayern Munich to drop points here so bet on Hendicap 1:0 for the home side as the odds for that a very high. Odds for Gladbach Win or Draw are over 2.5!