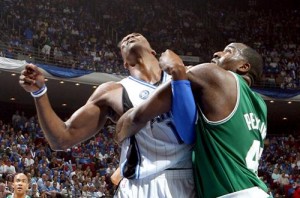 The Orlando Magic host the Boston Celtics tonight in the Eastern Conference Finals opener. The Magic will get their first real test in the 2010 NBA Playoffs, because as impressive as they have been in the first two rounds, we have to admit that their opponents simply weren’t of the highest level. The Bobcats hardly posed a threat as all they had were two dangerous players on their entire roster in the likes of Gerald Wallace and Stephen Jackson, so it was not a problem for such a deep team like the Magic to dispose them. Then they faced a Hawks team that has a lot of locker room issues and serious lack of chemistry. The Hawks didn’t pass the ball, didn’t trust each other and right after the first two games, they looked like they had zero belief in their basketball capabilities. But the Celtics present a totally different ball game to Stan van Gundy and his men.

Boston Celtics proved they are an experienced team that plays at their best when it matters the most and that’s what NBA Championship teams are all about. Rondo is playing at an MVP level every game now while Kevin Garnet looks back to his best plus his mid range jump shot is looking really good right now. Ray Allen is playing like Ray Allen, he is knocking down 3 pointers, drives to the basket, makes plays and plays great D. In NBA betting, and basically whenever you make NBA predictions, you have to account for the current form of both teams and also their mindset.

The big advantage Celtics have in these series is the fact they got a lot of Big Players. They got Kendrick Perkins, Big Baby Davis,  Rasheed Wallace and Kevin Garnet, so you got 4 players who can guard Dwight Howard and foul him without worrying about getting fouled out as there is always someone else to step in. Thus the Celtics have 24 fouls to make on Howard, they can practically foul him anytime they want and we all know D12 is not a great free throw shooter.

Another good news for Celtics is that Paul Pierce looks to finally be hitting his stride as he had decent last couple of games against the Cavs. Furthermore, the Celtics can match Orlando’s great 3-point game, because they got a lot of long range shooters in the likes of Allen, Pierce, Wallace and Nate Robinson. Tony Allen is also looking really dangerous.

Here is the whole Series Preview by NBA.com:

Orlando Magic v Boston Celtics Game 1 Prediction: Orlando are currently on a 12-0 run taking into account the 6 straight wins they ended the regular season with. This run of consecutive wins will eventually end in this Eastern Finals and it could even be tonight! The Value is certain on the Celtics in Game 1 as bet365 offers you 3.45 for them on Money Line.

BetOnWins NBA Pick: Celtics To Win Game 1 @ 3.45! Of course, keep mind this is a wild type of pick in which we are mostly after the Value so don’t bet your house on it but it’s certainly worth the try.