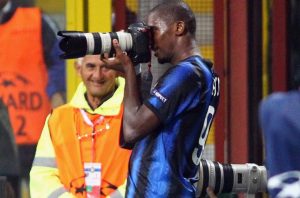 BetOnWins.com provides a Cagrliai v Inter prediction that will hopefully make you a lot of money due to its accuracy. Inter are currently 3rd in the Seria A standings with 11 points from 6 matches while neighbors AC Milan are on top having collected 14 points from 7 fixtures. A win with over 1 goal difference will see Inter go back on top of the table before the upcoming Champions League group games. Nonetheless, Cagliari are a dangerous side and have proven time and time again they are not afraid of the big names in Italian football. On the contrary, these are the events where they excel.

The main thing about Cagliari v Inter prediction is that the Nerazzurri have  a lot of important players missing and they are starting to feel the heavy burden of expectations by media and fans alike. Everyone expects them to win every game as they won the treble last season, but what most people forget is that opposing teams go super motivated against the current Champions League title holders in order to make a name for themselves. That makes it even harder for Inter to win on a regular basis. It’s similar to what’s happening with Man United in England.Everyone favors them to win and they end up drawing every game, most likely 2-2.

But back to our Cagrliari v Inter prediction. For this particular fixture, Rafa Benitez will be unable to rely upon the MVPs of Inter’s treble winning campaign as Esteban Cambiasso, Argentine compatriot Diego Milito and Macedonian forward Goran Pandev are all missing. Benitez demanded reinforcements from Moratti during the summer but they fell empty handed on the transfer market and now having to defend 4 titles (incluing the Super Coppa of Italy), plus a serious commitment for the FIFA 2011 Club World Cup, Inter are starting to feel a bit short on roster. 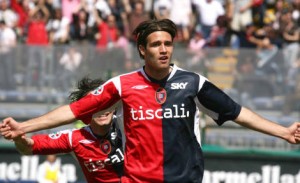 On the exact opposite end of things, Cagliari are living a more realistic plan in their 2010/11 season with their sole goal of remaining in the top flight, troubling the so called big guns and possibly somehow make it into Europe. What’s interesting about this Cagliari v Inter prediction is that Robert Acquafresca (pictured above) was brought up by Inter’s youth academy and is in fact currently “owned” by the Nerrazzuri so he will be facing his former/original employees in this match and in such instances players usually score.

Cagliari have the capabilities to trouble Inter, especially when playing at home with Matri and Acquafresca as the two forwards and Andrea Cossu as the maestro just behind them. The home side certainly has what it takes to get a point or three from Inter with their dangerous counters and dynamic style of play.

Cagliari v Inter Prediction: Inter are missing some of their most important elements of last season’s incredible success in the likes of Cambiasso, Milito and Pandev so we feel a draw could well be on the cards here.