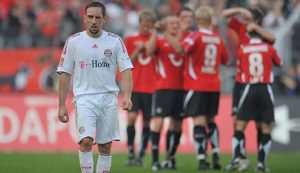 The late Saturday game from the Bundesliga features Bayern Munich against Hannover 96. Of course the home side are clear favorites for this game, but we don’t expect it to be such a straight-forward affair. Surprisingly, Hannover 96 posted an emphatic 4-2 win against title-contenders Schalke last Saturday, so they will be pumped for this game against the league leaders.

Bayern Munich have some distractions here as they will be playing the crucial Champions League semifinal next Wednesday so their focus might not be on 100% here. Hannover on the other hand are a dangerous team as they are fighting for survival. They are currently in the relegation zone but with Bochum having already lost on Friday, Hannover 96 have the chance to climb up and reach safety by earning at least  a point here.

BetOnWins Pick: Both Teams to Score offered at 2.00 by bwin. Bayern Munich will certainly score at least once, while considering that Hannover scored 4 goals in their last game and it was against Schalke, plus they are super motivated to avoid relegation, the away side should also score at least once. Therefore, bet on Goal/Goal.