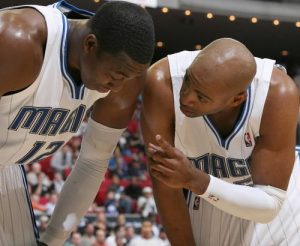 Orlando Magic take on Boston Celtics in Game 2 tonight looking to settle the score. For Orlando, Game 1 was the wake up call they badly needed after easily sweeping their first two opponents in the 2010 NBA Playoffs. Celtics are an experienced, Championship-caliber team that has the perfect Postseason type of mindset. The Magic got a reminder of that in Game 1 and are now well aware that getting into the NBA Finals won’t be a breeze, if they make it all.

“I don’t think we were prepared for the level that they were ready to play,” said Vince Carter, who was the Magic player that didn’t dissappoint in Game 1 as he was doing everything possible to get his team back into it. “They were ready to go from the jump. And we weren’t on their level from the beginning more than anything.’’

As we predicted in our Game 1 Preview, the Celtics had 4 big players to switch on Dwight Howard and everyone got his turn to foul him and distract his rhythm. And they did an excellent job at as Howard went cold and shot just 3-10 from the Field. That was after he posted the record breaking 27-32 from the Field in the entire series against the Hawks setting a record for the highest field goal percentage in an NBA Playoffs series. But the C’s knew how to stop him and they will look for more of the same in Game 2. At times their falls on D12 were quite brutal and absolutely intentional but that’s the Postseason where every possession matter so nobody can blame them for wanting to win.

But Rashard Lewis was the man who disappointed the most in Game 1 as he never got it going. He missed 8 shots from 10 attempts, 0-6 from the 3-point range! That’s obviously as low as he could possibly get, so tonight the Magic will get a big boost if Lewis gets back to normal, and he should do as he is their highest paid players, getting about 20 million USD per season! He certainly didn’t play like it! For the money he gets, he should certainly feel obligated to step up. Thus a good NBA betting pick would be to bet on Lewis scoring over 19 points in Game 2.

Bottom Line is that Orlando Magic had a terrible Game 1 and yet at the end they lost with just 4 points, which says a lot about what could potentially happen should they have a decent performance tonight. And we are not talking about them doing something incredible, but just to play at their usual level. But of course, you only play as good as your opponents allow you to, so it might be the case of Celtics playing great Defense. But it’s also true that the Magic missed a lot of open shots they normally make.

The Magic can spread the floor and hurt you on the perimeter and that’s the biggest problem for the aging Celtics as they struggle against teams who move the ball around quickly. That’s a big factor to consider when making such NBA predictions. Plus the Magic have Dwight Howard in the paint and even if he doesn’t have a great scoring night, he can still be extremely productive and help his team win with his presence under the basket, blocked shots and rebounds.