A massive games awaits football fans worldwide with this Tottenham v Inter prediction. The Italians have the chance of guaranteeing qualification for the Last 16 with a win at White Hart Lane, while the hosts know they must get something out of this game in order to stay in contention with Werder Bremen expected to beat Twente. Rafa Benitez is coming back to England against a manager (Harry Redknapp) that he never managed to beat while in charge of Liverpool.

There are a lot of important factors to be taken into consideration in order to come up with an accurate Tottenham v Inter prediction. At the end of the day (game), you would like to have your money on a bet that pays out, regardless of what type it is – whether it’s Both Teams to Score, First Half/Final Result, or Goal Scorer, doesn’t matter as long as you get paid. So the idea is to bet on a Tottenham v Inter prediction that pays off.

An interesting statistic with respect to BetOnWins.com’s analysis of Tottenham v Inter is that the Hotspurs who are traditionally a super unstable and unpredictable side, have leaked at least one goal in their last 12 matches straight. Tottenham are practically guaranteed Over 2,5 Goals and Goal/Goal every time they step on the pitch but tonight could be a boogie night in the fatal 13th match. We won’t be completely surprised to see this highly awaited “spectacle” end in a goalless 0-0 draw.

Both coaches had some quite relevant interviews in the light of this Tottenham v Inter prediction and analysis. Here is part of what Benitez said: “We will try to control the game, but our opponents will want to do the same. On Saturday I watched their Premier League game against Manchester United and I realised that they were mostly concentrated on tomorrow’s game against us.” 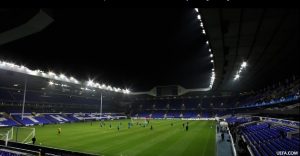 As Rafa pointed out, the Londoners were actually saving their breath for this one and that should be advantage for them. Inter however played their league game a day earlier but they had to travel to England so the home side advantage should prove to be a major help for the Spurs.

Inter are missing some important players coming into this game. Their biggest loss is argubaly the world’s best goalkeeper Julio Cesar who has been saving them over the last 3-4 years or so. Without him, Inter are far more vulnerable at the back although his replacement, the 35 year old Luca Castelazzi is a stable keeper. Then again, Inter will also be without midfield battler Cambiasso and the creative and highly experienced Dejan Stankovic, which were integral parts of last season’s treble winning starting eleven.

Harry Redknapp will also have to deal with a lot of injury problems which is another important element of an accurate Tottenham v Inter prediction. Tottenham are still without striker Defoe, captain Ledley King (groin), Vedran Ćorluka (groin), and England international defender Michael Dawson (knee). Furthermore, Tottenham will also be without their starting goalkeeper Gomez replaced by Italian Cudiccini as the Brazilian was red-carded at San Siro.

Tottenham v Inter Prediction: Inter will be without Julio Cesar between the sticks and that can setup a bad result for the current title holders. Both teams have their fair share of absentees and just might settle for a draw that will leave everything still up for grabs.