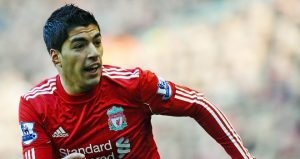 The second round brings us one of the biggest derbies in the Premierleague as we bring you our Arsenal v Liverpool prediction. Both clubs are going through difficult times, but things have gotten much harder for the Londoners in recent weeks. Indeed, the situation looks quite desperate for the Gunners and that makes it impossible to justify the odds offered by betting companies on this match. Arsenal are tipped as favorites to Win at 2,20, while Liverpool going in as underdogs at the massive odds of 3,00 for the win. Here is one of the best free football bettings tips you can ever get – anytime you have the chance of trippling your money on a team like Liverpool, no matter the conditions, we suggest you take it.

The Gunners are in dire straights going into this one. First and foremost, Arsene Wenger failed to make any major signings during the summer break, except for Gervinho, but he will miss this game (as well as the next two) due to the red card he got in the opener against Newcastle. Cesc Fabregas’ long transfer saga finally came to an end this week, as the Spaniard completed his move to Barcelona and even took part in the Catalans winning goal in the return leg of the Supercopa against Real Madrid. To make matters even worse, Samir Nasri who was tipped as Fabregas’ replacement, is also on his way out tempted by Man City’s millions. 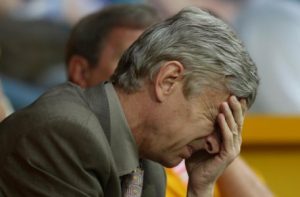 Arsenal’s creative talents in the middle of the park will suffer further with the confirmed absence of Jack Wilshere who misses due to an injury. Diaby is also out. And when you add to that the fact that Arsenal have traditionally been poor in defense and especially at the goalkeeper position, our Gunners vs Reds prediction is definitely swinging in favor of the visitors.

The recent history of the head to head mettings is also supportive of such an Arsenal v Liverpool prediction. Basically, Pool have not won in this derby in its last 8 editions! In fact, the Reds have never won at The Emirates, and we all know there is always a first time for everything! Actually, the last time they won an away game against the Gunners was exactly 11 years ago! 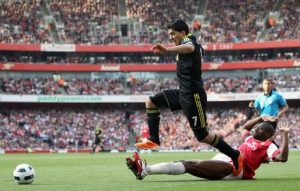 Truth is, now is the idea time for Merseysides to grab the win. Arsenal are going through a shock right now without their captain and club icon. There is a lot of uncertainty around them at that moment, along with the usual suspensions and injuries to key players. Furthermore, they have the Champions League Playoffs to worry about, as Udineshe showed they are not to be messed with.

Last but not least, Liverpool are not such a tragedy as most people think, depsite their dissaponting draw with Sunderland at the start. Suarez is turning into one of the best forwards in the game. Andy Carrol is a great complentary player as he is the exact opposite of the Uruguayan in terms of style. Steward Dawning looked lively in his official debut. So Liverpool could well scrap up their first win at the Emirates.