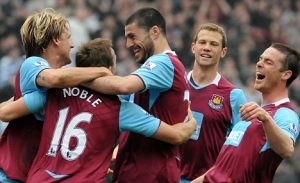 A really interesting game is about to be played at Anfield tonight as Liverpool hosts West Ham. Liverpool are still trying to reach that ellusive 4th spot but this task is now hanging on a thin thread as they are 8 points behind Tottenham. Should they fail to win tonight, their Champions League hopes will be officially over, but those who know football well are well aware that these hopes have evaporated a month ago.

Tottenham Hotspur’s impressive derby wins against Arsenal and Chelsea have put them in pole position for Champions League football next year. Meanwhile, Liverpool are still trying to fool their fans claiming that they are not out of that fight just yet.

But given their injury difficulties and the fact that West Ham are fighting for survival, it certainly looks like the Anfield faithfulls are in for anothe major dissapointment on Monday night. West Ham are just one place above the relegation zone with just 3 points more than Hull City so they will be desperate to earn some points against the Reds.

Without Fernando Torres up front, Liverpool have often looked clueless in attack this season. And that’s absolutely normal considering they don’t have quality players in attack as Ngog is not even close to being the type of player who can decide games for LFC. Thus, the home side will be looking for goals tonight from Steve G, Babel and Maxi who is yet to settle.

West Ham on the other hand have been on a high in recent weeks. Their position in the Premier League is under serious threat. Thus they will be super motivated for this encounter. Here is what assistant manager Steve Clark had to say:”It’s been a difficult season right from the start, but we’re still in there fighting,” said assistant manager Steve Clarke. e have to achieve the objective of staying in the Premier League and we’re all confident we can do that.” The danger men for West Ham would be Carlton Cole and the Brazilian they signed recently – Illan.

Now you probably know already that BetOnWins.com is all about giving the best football predictions on a daily basis and we are talking about football picks and betting tips that are based on solid info. So what could we possible have in store for you this time around? English football is all about statistics and traditions and with that in mind, we have to point out that West Ham have not won at Anfield since 1963! That’s 46 years without an Away win against Liverpool. Could today be the day in which this historical trend will finally end? We certainly think so!

BetOnWins Prediction: With all the problems surrounding Liverpool both on and off the field, they will be a troubled side tonight. We advise you to bet on Double Chance in this game – Draw or West Ham which is one of the best soccer predictions you will ever get. You can place this bet at bwin at odds of 3.1! This bet is also known as Hendicap 0:1, both types of bets are exactly the same.