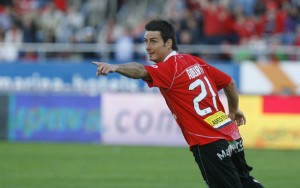 The late Monday night Spanish Primera game features Mallorca against Osasuna. The home side will be looking to strengthen their position for Champions League football next year as they are going through a remarkable season with lots of positive results.

Mallorca only managed a draw in their last game as the ref had their winning goal disallowed late in the second half against Zaragoza. Thus Mallorca now have 2 draws and one loss from their last 4 matches. They will certianly be motivated to make up for that lost ground with a victory tonight at home where they have an exceptional record – 13 wins in 15 matches and no draws!

However, Mallorca won’t have it easy against a dangerous Osasuna side still looking to avoid the drop. Over the last 2 months, Osasuna have failed to ein even a single point having lost 5 straight matches, without even scoring a goal in their last three.