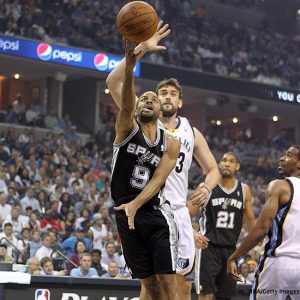 It’s do or die time for the Spurs as they take on Grizzlies tonight in Memphis in what is certainly amongst the interesting NBA Playoffs predictions for the 2010/11 season. The Grizz are on the verge of pulling off one of the biggest upsets in the entire history of the league, as the eight-seeded club is about to eliminate the team with the best record. The atmosphere in the buillding will be at all time highs, but can the young and inexperienced Memphis team make the most out of that opportunity against the good old Spurs who have been there, done that? The answer to that question is provided in our Spurs at Grizzlies Game 6 pick.

Few could have predicted that Memphis would have a 3-1 lead in the series going into Game 5 in San Antonio. Not only because they marked their first playoff win in franchise history, but also because Spurs were tipped by experts as one of the big favorites to win the title. Greg Popovich’s men had a strong regular season in which they were destroying all types of opponents with 10-20 points difference on a nightly basis. And yet, this form looks like long gone now with the team on the ropes against a huge underdog as Memphis.

This just goes out to confirm that regular season and playoff basketball are two different things, and having the best record in the league as not so important anymore as Lakers appear to know all so well. Look at the Cavs in the previous two season with Lebron – they had the best regular season record and collapsed in the postseason. Just a few months ago, everyone was scared of the Spurs as they were literally demoralizing their opponents, sometimes with 30+ points difference (against Heat for example). And now, they look like a bunch of self-sorry old men destined for an early Playoff exit.

Even though Tim Duncan has significantly stepped up his game, while Manu Ginobilli is doing miracles playing through an injured arm, the Grizzlies are still dominating in the series thus far. However, the last game did provide some signs of hope for coach Pop as the Spurs won 110-103 in OT in a faster paced game, just the way they’ve done all season long.

The psychological advantage is on SAS, as they won a super closely contested Game 5 that has left bitter memories and quite negative emotions in Memphis’ top player Zac Randolph. Randolhp admitted he didn’t sleep for another 18 hours after the game as a result of that heart-breaking loss. He scored 18 of this 26 points in the 4th quarter and OT, ultimately giving 110% effort only to see his team lose so dramatically due to a Gary Neal 3-pointer in the last seconds of regular time. But that’s what NBA Playoffs predictions and outcomes are all about. Hitting big shots when it matters most. Here is a video of that amazing shot he hit:

If there is a team capable of overturning a 3-1 deficit, it’s the Spurs. They have the necessary experience in the likes of their big three, so they shouldn’t be shaken up by the atmosphere in Memphis tonight. Here is what Manu said on his team’s advantage in that Spurs at Grizzlies Game 6 Pick: “We’ve got to be smart, just don’t give them the ball and let them run and make silly mistakes. Just use our experience. That age that everybody talk about we have to use it smart.”

Spurs at Grizzlies G6 Pick: Our money is on SAS to win tonight and force a Game 7 at home. It’s going to be one of the most tense and closely-contested contents in the 2011 NBA Playoffs. Everything is at the stake for San Antonio’s experienced core and they don’t have their best years ahead of them, hence they should give it all they got for this one.