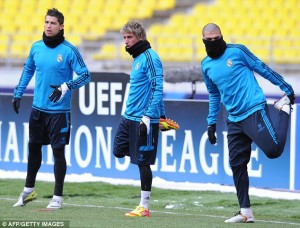 Real Madrid are in a remarkable run of form right now, but will they be able to continue that remains to be unfolded in our best Champions League betting pick for today, 21st February. Real won all six of their group stage matches, and now they are looking to build that streak further and take it deep into the elimination stage. Yet, we are not quite sure they will manage to do it, at least according to our CSKA v Real prediction.

Going into this CSKA v Real prediction, everyone knows about just how tough the weather is in Moscow at this time of the year. Temperatures of about minus ten degrees Celsius are expected for this game, which would make it quite difficult for the softer Spaniards to adapt. The Madridista are not used to play under such hard conditions. To make matters worse for them, they will also have to cope with the artificial pitch at the Luzhinki stadium, and obviously, being CSKA’s home ground, the Russians are fully accustomed to playing on it. The extremely low temperatures in combination with the artificial pitch are two serious factors that would be working in favor of the hosts in this CSKA v Real prediction.

Much has also been said about this being just the first official match for CSKA since December 7th, but as saw last week, that might not be that much of a problem for them. Zenit were in the exact same position as them in their battle against Benfica, and yet we all know how that game ended (3:2). Actually, this could be an advantage for the Russians in this CSKA Moscow v Real Madrid prediction, as they’ve had not several days, but months to prepare for this crucial encounter.

Nonetheless, there are some bad news for the home side in this CSKA v Real Madrid prediction on February, 21st. The Russians sold Vagner Love to Flamengo, and he was their best striker along with Doumbia. The two had formed one of the deadliest strike duos in football, but the management decided to grant Love’s wish and let him get back to his much warmer mother land. Their starting goalkeepr Igor Akinfeev is out with an injury, as is the Japanese forward Keisuke Honda.

In an attempt to replace Love, CSKA landed South Korean forward Kim In-sung. They also brought in the Sweden midfielder Pontus Wernbloom from AZ Alkmaar. Another strong forward mentioned by Jose Mourinho in his evaluation of Real’s opponent, is Ahmed Musa who was transferred from VVV Venlo. Those three additions are expected to make up for the loss of Love, plus the injured Mark Gonzales and Honda.

Truthfully, there is not much new that can be said about the Spanish giants going into this CSKA v Real prediction, which is the top Champions League betting pick for today. They have taken a strong 10-point lead in their league battle against Barca, and that should allow them to calmly focus on Europe’s prime competition. Their only injury absentee is Di Maria.

CSKA Moscow v Real Madrid Prediction: The cold weather in combination with the artificial pitch will present Real with obstacles they have not faced so far this season. It’s a totally different game, as even the ball itself does not behave in its standard way (it does not bounce as high, it’s hard as a rock, etc). The Spaniards won all their group matches, so they are in a run of six straight Champions League wins. We expect this run to end tonight with a draw. Of course, that’s kind of a long shot, but well worth it judging by the odds. Both teams should be able to get on the score sheet as well.