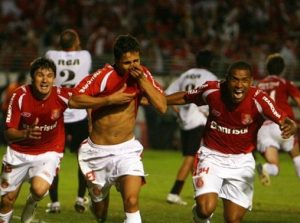 It’s the South American football classic of Argentinians against Brazilians as Estudiantes host Internacional trying to overturn a 1-0 deficit from the first leg. Estudiantes are about to miss out on the Argentine League title right at the end as they made a goalless draw with Rosario Central on the 9th of May at home. That draw cost them the first place and now they have to rely on luck in the last round hoping that Argentinos Juniors will drop points in the upcoming final round. Finishing second in the league will be enough of a dissapointment for them and now to go out of the Copa Libertadorers will really break their fans’ heart. Here is the analysis behind our Estudiantes v Internacional Prediction.

In order to overturn the result from the first CL quarter-final, Estudiantes will have to win against a very dangerous Internacional team. In regards to our Estudiantes v Internacional Prediction, it should be noted that the Brazilians beat them in the last meeting between the two teams in Argentina despite even playing with 10 man for over 60 minutes.

The bad trend about Internacional is that they are playing their best football at home while their away games have been less than impressive. Internacional have won 5 out of 5 at home conceding just one goal in the process, and have yet to win away in this year’s Copa Libertadores. They had 3 draws in the group stages and lost the first leg against Banfield 3-1 in Argentina. It’s really important to consider the home and away form of both teams for our Estudiantes v Internacional Prediction. Of course another a draw here will qualify Inter for the semis but they are well aware they can’t sit back and have Estudiantes control the entire game.

During the weekend 1-4 win against Colon during the weekend, Estudiantes were able to rest some of their key players like German Re and Jose Sosa while Veron was suspended. Marcos Angeleri should also make his return into the starting lineup after missing the first leg.

21 May, Estudiantes v Internacional Prediction: BetOnWins has the winning betting pick for this game but Information Costs Money! Get our pick at your email for just 10 USD! If you feel uncertain about our accuracy, just check our “Today’s Picks” category to see how we’ve done so far. All you have to do is the hit the Pay Now button bellow and proceed with the PayPal payment process. Once done, you will get our pick in an hour. And we are so certain we can pick the winner for you that if our prediction is wrong, we will send you your money back on the next day! Try Us, you got nothing to lose with BetOnWins!