Washington Wizards are a work in progress with John Wall being the centerpiece. The Pistons on the other hand seem to work with no progress as they have the elements needed to succeed but just keep on failing. We dissect tonight’s match up between those two teams in this Wizards at Pistons prediction.

Wizards and Pistons are on a totally different level when it comes to team chemistry. Despite their youth and inexperience, the Wizards seem to share a family loyalty that previous formations from this club didn’t have. The guys on this roster really care about each other and spend a lot of time together oustide the practice facilities and that pays off on the court. It results in better understanding between the players, lack of selfishness, everyone is sharing the basketball on ofense and that eventually helps you win ball games. 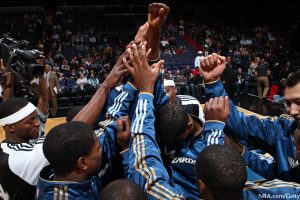 Andray Blatche confirmed this newly found chemistry by saying the following: “I’m not going to lie. I’ve been with the Washington Wizards for five years. I can honestly say this year, with this team we are closer than I have been with any other team. We are all one big family. In the past we were cool, but this year we are all like brothers. We all get along. We hang out off the court, we BBM and text each other. We are very close.” 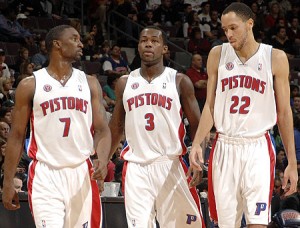 The Pistons have looked like a tired and beat up side that just doesn’t have the fire or energy to win. They do have a talented group of players and with names likes Charlie V, Rodney Stuckey, Ben Gordon, Ben Wallace, Rip Hamilton, Prince, you would expect them to at least by in the Playoffs and make a run there. Even Lakers’ head coach Phil Jackson made a comment about the Pistons not playing hard.  In other words, Pistons are currently a talented team that just doesn’t perform up to their full potential and flat out suck. They look burned out and that’s not so surprising givent that the majority of their roste consists of players who are past their prime. Prince and Hamilton were the backbone of the Pistons team that won 3 titles in the previous decade, and they don’t look so hungry to win anymore.

What’s even more bother for the Pistons are the internal conflicts that are currently going on. Rodney Stuckey was benched earlier this month due to problems with coach John Kuester. Then we saw the actual on-court incident between John Kuester and Prince who were caugth on camera arguing with each other during Monday’s loss against Warriors. Against the Lakers, Hamilton was ejected for 2 technical fouls.

Hstory also plays an important role in this Wizards at Pistons prediction. In NBA betting, it’s really important to identify trends and bet against them. Well, with that in mind, the Pistons have won 5 straight against Washington which is their longest active streak against any opponent in the NBA. Meanwhile, Wizards are yet to win away from home this season.

Our Wizards at Pistons prediction is for an away win. The online betting companies are favoring Detroit which makes this bet even sweater as the odds for Wizards on Money Line are over 2,70! The only concern is the status of their star John Wall. He is currently listed as “Day-to-Day” so we won’t know for sure whether he plays or not until just before tip off, but if he does, then this is a top value pick!

Wizards at Pistons Prediction: Wizards are going to pull off a surprise victory here against a troubled Pistons team.