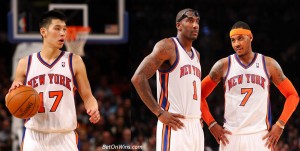 But as you all know, BetOnWins.com is about betting, providing sports insights and the most accurate NBA tips, handicaps and picks. In terms of all that, what’s interesting about this Knicks at Heat prediction is that the online bookies are favorizing Miami in a big, big way, and that could cost them a lot of money.

NY Knicks at Miami Heat Prediction: The Knicks are still a team in transition, while Miami have developed a style of their own and when they are true to it they are awfully hard to beat. Yet, in terms of NBA betting, the value is definitely on New York here. With a starting five of Lin, Fields Melo, Amare, Chandler, Fields, and a strong bench that includes Smith, Davis, Walker, Novak, and Jeffries, they can just snatch a dramatic win here if they have a bit of luck and flair on their side.