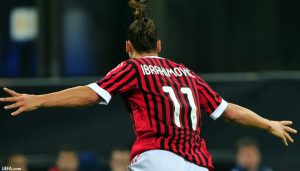 Our list of today’s top champions league predictions features four really big games that are bound to grab the attention of the footballing planet. Milan takes on Barcelona which is without a doubt The Game of the night. The Italians will be looking to steal the first place by beating the mighty Catalans. Up North in the continent, Arsenal hosts German champs Borussia who are in desperate need of a win. So we have a lot of accurate betting picks for tonight’s champions league clashes.

Of course, Ibrahimovic would be the man on center focus at the San Siro as he will looking to prove something against the club and the manager who did not believe in him and sold him after just one year. It turned out that Ibra is not compatible with Barca’s style but that was evident even before the deal and shouldn’t have come as a surprise to anyone. He is the type of player that wants all the attention on him and be the main focus of all attacks, yet we all know Barcelona do not play that way as they are the closest thing to the definition of a “team”.

Thus, one of our Champions League predictions for tonight is on Ibrahimovic to Score At Any Time which is offered at Bet365 for the highly valuable odds of 3.00! You can tripple your money just by betting on Ibra to score and you get paid regardless of whether he scores first, second or third, etc, and regardless of the final result of a game that’s though to predict.

We expect a dynamic game in which Both Teams to Score looks like hundred percent sure bet, because of the class that both sides have in attack. Ibrahimovic will be super motivated, Robinho and Pato will bring the creative spark straight from Brasil and the entire stadium will be backing them, so Milan, despite the odds of bookies being in favor of the Catalans (1,72 to Win), are in very good position to win this match. Online betting companies like Bet365 are offering 4,75 on Milan to win, which is absolutely amazing considering they are club with most titles in the entire world and are playing at home with all their stars fit. There is definitely great value betting on AC Milan to beat Barcelona. Futhermore, Barcelona are 26 games unbeaten in all competitions, and such records are quite long for modern day football and are bound to end at some point. To add to that, Iniesta who is the true engine of this team has been ruled out for the trip to Milano. 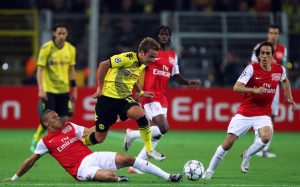 Dortmund shocked a lot of football fans this weekend when they defeated Bayern at Alianz Arena with without even conceding (0-1 FT), and now they will need a similar display against Arsenal. BVB find themselves at the bottom of this group with just 4 points, and a win is a must for them in order to get through. We reckon that as BVB are the champions of Germany and have plenty of quality in their squad, they have a chance of completing their mission of grabbing all three points here.

“Here is what coach Jurgen Klopp said about this Arsenal v Borussia prediction: It’s an all or nothing game. Arsenal can qualify with a draw, but they are not the type of team who play for a point; that’s not their philosophy. That said, if we take our chances tomorrow everything will be fine. We cannot focus on anybody else. We have to win this game.”