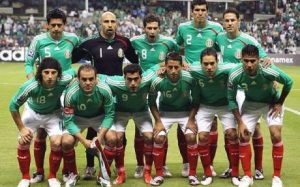 England plays Mexico in a World Cup warm up tonight at Wembley. Fabio Capello has already stressed to the media that he is about to experiment with his side as there are a number of first team players missing. Thus, our England v Mexico prediction might surprise most people but it’s based on some solid facts explained bellow.

Starting goalkeeper David James is given some extra days of rest before the World Cup, so Joe Hart and Robert Green are expected to participate for 45 minutes each, but the defense remains an even greater issue for the Italian.

The four Chelsea players Frank Lampard, John Terry, Ashley Cole and Joe Cole will all miss out the game because they played in the FA Cup Final last weekend, so just like in the case of David James, Capello has decided to rest them and try new players in their positions.

The central defensive pair should feature Jamie Carragher and Ledley King but they don’t have any sync between them plus they have not been really solid for their respective clubs all year long. Up front we should see Jermaine Defoe, Darrent Bent and Wayne Rooney all getting some fairly decent playing time.

Mexico are a very dangerous team as they have a squad full of young talents that will be eager to impress at such a big stage as the Wembley Stadium and of course an opponent from England’s caliber. We are talking about top players who play in the Premier League like Carlos Vela (Arsenal), Giovani dos Santos (Tottenham) and Guillermo Franco (West Ham). They will also be powered by Guardado, Medina, Blanco, Osorio and Hernandez. Javier Hernandez was actually signed a couple of months ago by Sir Alex Ferguson for Manchester United.

England v Mexico Prediction: England are yet to lose under Fabio Capello and it’s better for that to happen in a friendly game rather than at the 2010 World Cup. They will be missing a lot of key players so Don Fabio will be experimenting with the side. Therefore, there is a lot of value on betting on the surprise in this game.