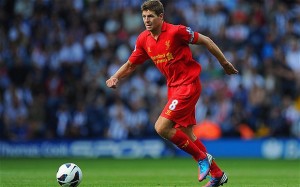 Surely, one of the most best popular soccer betting picks for today is this Liverpool v Man City prediction. We have done our research, and have some quite interesting and useful info to share with you. Firstly, the Citizens have not won at Anfield since 2003. On the other hand, a defeat today would make Brandon Rodgers the first Pool manager since Bill Shankly in 1959 to have his team without even a single point from his first two league games. But according to the most accurate Liverpool v Manchester City prediction, the Reds will show their resilience. Mancini knows just how hard Liverpool are to be defeated at home.

Obviously, the first key element to a good Liverpool v Man City prediction lies in the examination of the teams’ current form and the available players. Steven Gerrard was given a rest in the midweek Europa League qualifier against Hearts, so the famous captain is now expected to lead his team from the very first minute. The big blow for Rodgers is the unavailability of Daniel Agger, who got a red card in the team’s previous league game – the 3:0 defeat versus WBA. Their starting left-back Jose Enrique is expected to return to action today. At least according to our Pool v City football predictions.

On the opposite end, the big blow for City is the injury to Kun Aguero, that will keep him out of the lineup for at least a month, just when he was in top form. He was the club’s goalscorer during his debut season (last season), and thus he will be sorely missed by the Man City fans. Gareth Barry is also unavailable for selection due to stomach problems, as is Micah Richards. 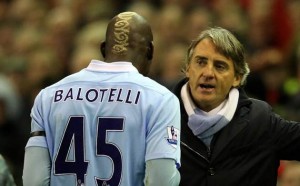 Roberto Mancini had some interesting Liverpool v Man City predictions: “I think Liverpool will fight for the title this year because they play well, they bought good players, they have a good manager and they have changed their style of play. Every game you play at Anfield is really tough. They come from a game against West Bromwich where they didn’t deserve to lose but football is strange. For this I think it will be a hard game.”

There are some really interesting stats about this Liverpool v City prediction for August 26th, 2012. Andy Carrol has scored 4 goals against City, which is his best record against a given team in the league. As mentioned, Manchester City have not won at Anfield in their last ten attempts, six of them ending in draws! The Reds have earned just 18 league points in 2012, which is quite bad given that they’ve played 20 matches during that period.

In the Eyes Of The Bookies

Another aspect of this Liverpool v Manchester City preview and prediction is how the online betting companies perceive the game. Bet365 offers a pretty good value for a win on the Reds, as the odds of 3.00 mean you will triple your money. The draw is rated at 3.40, while the away win can be backed at 2.40. Obviously, the current form swings things in favor of the visitors, not only because they are a top team and the current champions of England, but also because Liverpool have looked totally out of sync during these first official minutes of the 2012/13 season.