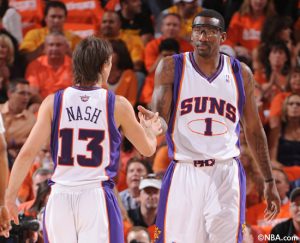 After winning Game 3, the Suns will be looking to keep the momentum going as they try to even the series tonight in front of their own crowd. Game 3 was a reminder of just how good the Suns can be when they play in their usual high paced style of basketball. Now, they will be fully motivated to maintain that level going into the crucial Game 4. This game is of huge importance for them, because if they lose it the series will practically be over as they will be down 3-1 heading into Los Angeles, California.

However, a win for the Suns will bring the Western Finals back to square one and the Suns will go in Cali looking to steal an away game with their confidence sky high. So it’s a make or break situation for Alvin Gentry and his men. Therefore, they will need a great game from all their units while their Defense will be the key to our Phoenix Suns v LA Lakers Game 4 Prediction.

Suns’ head coach did a great job with the zone defense that he setup in Game 3 and it was the real factor which helped his team win. The Lakers looked confused at times and it was much harder for them to score compared to the first two games. Thus, we expect Gentry’s team to keep playing the zone, but at the same time Phil Jackson will probably come up with answer for it as he had a couple of days to rethink his strategies.

The most definite Phoenix Suns v LA Lakers Game 4 Prediction is that we will see a great game of basketball with a lot of three pointers, dunks, pick roles between Nash and Amare and drama till the final seconds. The next big factor for the Suns is how Amare will perform. He had a great Game 3 equaling his Playoff scoring record of 42 points and it showed that for Phoneix to win, he has to play aggressively and score a lot of points. His rebounding is also of crucial importance and he grabbed 11 boards in that win which is more than what he had in Games 1 and 2 combined (3 and 6).

But perhaps the biggest boost for the Suns in their win was the performance of another big man – Robin Lopez. Lopez scored 20 points in 8 from 10 shooting. Still, he wasn’t as effective as he should be under the rim as he collected just 3 rebounds. Rebounding will be one of the key components for the Arizona-based team in Game 4. They have to step up and grab more boards if they want to win. And of course, that’s easier said than done considering how big the Lakers are with Bynum, Gasol, Odom and Artest.

The way Bynum has been playing in these Western Finals is a big concern for Phil Jackon because his young center has been underachieving big time. He had just 2 points in Game 3 and he played only 7 minutes! Obviously that knee injury is bothering him and seriously affecting his game. That is something that the Suns should take advantage of and one of the reason why we pick them to win in our Phoenix Suns v LA Lakers Game 4 Prediction.

Phoenix Suns v LA Lakers Game 4 Prediction: Bet On Suns To Win! Nash, Amare, Jason Richardson and Robin Lopez will be fired up for this contest and in front of their own fans the Suns will even the series.