As usual, BetOnWins has prepared the very best football betting predictions for today, November 26th, and our selection features matches from the Premier League and the Seria A. Manchester United will be looking to cut short the point difference between them and their city rivals who are topping the league with 34 points. City are still undefeated but a poor performance in the Champions League (2-1 defeat to Napoli) has probably shaken their confidence, plus they will have a difficult task this round travelling to Anfield. In Italy, Lazio versus Juventus is the big derby on Saturday night. So let’s find out what are the most accurate football picks today, November 26th, 2011.

WBA have been on a good run as of lately with 3 wins from their last 5 matches. Tottenham have also been on their way up having collected 25 points from their last 9 matches. That’s eight wins and a draw, which is quite an impressive run that has spurred them up to third place in the standings. This match will be a clash between two of the most experience managers in the footballing business – Roy Hodgson versus Harry Redknapp respectively, so it’s a clash that will also be very interesting on a purely tactical level.

Of course, our WBA v Tottenham prediction would not be accurate without a proper analysis of the available squads.There are two really bad news for Redknapp. Yesterday, he revealed that main players Defoe and Rafa van der Vaart will most likely miss the game due to injuries. This could pave the way for Roman Pavlyuchenko to make his first start of the season, but still it’s a huge loss for the team and that could prove decisive as they look to extend their unbeaten run. Dawson, Huddlestone, and Kranjcar have been long term casualties for Tottenham. Paul Scharner and Shayne Long are the two big absentees for the Albions.

Tottenham are a team that easily scores and concedes goals, while WBA are dangerous in attack especially when playing at home. Odemwingie looks like a good option for Goal Scorer at Any Time, along with Adebayor, but overall, our money is on a attractive game with more than two goals in it. That’s our WbA v Tottenham prediction. 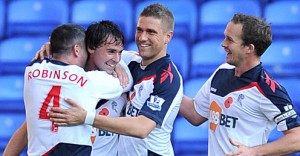 Our next best football prediction for today comes from the Bolton v Everton match. Bolton are without a number of injured players for this game. The list is long and it includes the following names: Mears, Chung-yong, Holden, Ricketts, Alonso, Davis, Gardner. The only piece of good news for the home manager is that he welcomes back central defender Boyata. Meanwhile, Everton manager David Moyes is sweating on the fitness results of three players going into this game – Rodwell, Neville, Distin. Cahil has been confirmed out with an injury. Despite all these absentees, we feel that both sides have plenty of quality players left to produce a nice game with several goals in it.