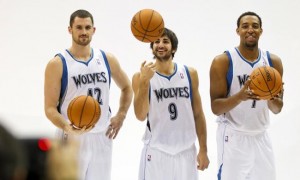 We won our opening pick for the new season as we accurately predicted that Bulls would beat Lakers at the Staples Center. Tonight, we feel we have prepared another winner for you in our run of the most accurate NBA betting picks, with our Timberwolves at Bucks prediction. Both teams lost their opening matches last night in a dramatic fashion, and another close encounter looks highly likely.

While the Bucks let a big lead slip away, the T-Wolves managed to get back against one of the best teams in the league (OKC) and setup a thrilling finale in which Michael Beasly failed to tie the game with 5 seconds left. So the losses these two sides experienced couldn’t have come in a different way, but the end result is probably equally dissaponting.

Still though, things looked more positive for fans in Minnesota. Rick Adelman who is one of the best basketball coaches ever, is in charge of one of the league’s youngest teams (2nd to GSW) and these guys have a bright future in front of them. Fans saw the nice debut of Ricky Rubio who displayed great vision the court and turn the crowd on their feet with his passes on way more than one occassion. The other rookie, the 2nd pick, Derrick Williams was equally impressive as he converted some of the Spaniard’s assists into dunks. Meanwhile, Kevin Love was eating glass as usual, while Darko Milicic reminded people just why he was once the 2nd draft pick only after LeBron James. Another bright list for the Wolves is the addition of J.J. Barrea. These are all important changes that we consider when producing the most accurate NBA predictions daily.

The bottom line is that the Timberwolves at Bucks matchup would be such that the visitors will have a good shot at winning here. Their starting five is now solid and the players coming from the bench are Rubio, Barrea and Williams, so they are just as dangerous.

In light of tonight’s best NBA betting prediction, we have to take into account how the Bucks are doing. Truthfully, they have been on the downward spiral ever since they reached the playoffs back in the 2009/10 season. They traded one of the better players in John Salmons who is now off to his second stint with Sacramento. Brandon Jennings is stringing good games with bad ones, and he is lack of consistancy, you can never know what to expect from him. The traded Correy Maghette for Stephen Jackson and that should improve their offense, although it didn’t happe in the first game. Carlos Deflino is questionable for tonight, along with rookie Mbah Moute.

Timberwolves at Bucks Prediction: Our money is on the Wolves to spoil the opening night party at Milwaukee. The main reason lies in the quality of their squad, and the betting value is definitely on them as well. They just beat them twice in the preseason games, so the odds given the bookies here are weird to say at least. You can tripple your money on the Wolves here!