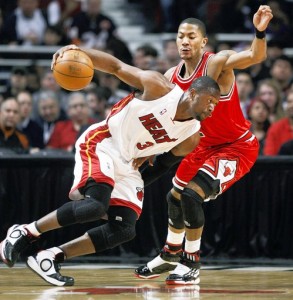 One of the best sports betting tips for today comes from the mysts of the NBA where as usual on Sunday’s, we have got a great matchup playing early in the States so that basketball fans in Europe can get to see their favorite players at a more acceptable/early time. It’s a repeat of the Eastern Conference Finals from last year, when Miami showed they are just too much for Rose to handle mainly by himself and they trimphed 4-1. Have D-Rose and Co learned their lesson and will they manage to get a revenge here?

The answer is negative according to the bookies which favor Miami for the win here. The Heat to win is offered at about 1.55 on ML, while the value is on the Bulls as they are the underdogs here and you can lay money on them at 2.50. The spread is locked at +4.5 points on Chicago.

Of course, it’s a tough game to call. That’s the very nature of such big time NBA predictions, because both teams are pretty even. Bulls have the better defense, but the Heat have the more weapons on offense. Chicago’s perhaps only flaw is that their offense is too dependant on Rose as has to be source for everything. His wingman Deng, who should be an All Star this season by the way, missed the team’s last three games, and is now listed as questionable for this one. Miami has LeBron, Wade and Bosh available to create instant offense, and their biggest improvement this season has been the growth of Mario Chalmers, the emergence of the impressive rookie Noris Cole, having Udonis Haslem fit and health from the verys start of the season, and the addition of the proven and hard-working Shaine Battier.

Both fans and players are pumped up for this one. That’s the time of game that gets everyone excited, including the likes of Rose, Wade and James as these are players that are designed to shine on the big stage. Joakim Noah had an interesting point on this match: “It’s the team that eliminated us last year. And everybody will be waiting for that game. It’s a game that as soon as that schedule came out, that’s definitely the game that you circle, that you come ready for.”

So in terms of the motivation, which in our expertise is one of the keys to accurately predicting the outcome of basketball games (and any sport for that matter), there won’t be much of a difference in this one.

Bulls at Heat Prediction: A massive game at the American Airlines Arena with the two best teams in the East. Miami are the more improved side compared to last year with the additions of Cole and Battier, the availability of Haslem, and the development/grwoth of Bosh and Chalmers. This season, LeBron has been scoring like he did in his Cavs days. Meanwhile, Chicago are struggling with some injuries as Rose has already missed 6 games this season, while Deng will most likely miss this one, and if that’s the case, then they don’t stand much of a chance against a better-equipped Miami team playing on their home floor.