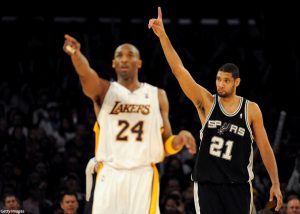 The LA Lakers will be looking to rebound against the top team in the NBA right now as the San Antonio Spurs come into town. This is without a doubt one of the biggest debries in basketball as the two best teams in the West lock horns at the Staples Center. One thing is certain about this Spurs at Lakers prediction – the men in purple and yellow won’t be lacking motivation this time around.

The Lakers are yet to win a big game at home this season, where they have already lost to some of the title contenders in the likes of Miami Heat (on Christmas Day) and the Boston Celtics this last Sunday. They had to work Over Time to defeat the Rockets in their last game at home, with Andrew Bynum missing out. Things won’t be any easier aganist the team with the best record in the league right now. The Spurs are 40-8, while Lakers are 34-15 with Dallas and OKC breathing down their neck for that second seed in the West.

There are a lot of factors that must be account for in order to turn this Spurs at Lakers prediction into the most accurate NBA pick for tonight. First of all, a big question mark is the availability of Andrew Bynum and his inside presence will be desperately needed by the Lakers since the Spurs have Dejuan Blair and of course Tim Duncan under the rim. If Bynum makes into the lineup, then this will certainly be a huge boost for the home side.

If he doesn’t make it, then Lamar Odom will get another chance to prove his All-Star credentials. By the way, the Reserves for the 2011 All-Star game in LA will be announced tonight. Kobe had the following to say about Odom stepping up: “He’s been doing that for us all year. People forget how well he was playing when Drew was down. He’s capable of doing that and stepping in and having huge games like this.”

A lot has been said about the Lakers not playing up to their full potential since the start of this season. And it does look as if they are just waiting for the Playoffs to begin, and no one can really blame them for being a bit sluggish as Kobe, Odom and Fish have won 5 titles. Still though, you can see that Kobe does take it to the next level in the really big games, like the one against the Celtics last Sunday when he scored 41 points.

Hence the key to this Spurs at Lakers prediction, as anyone of our accurate NBA Picks, is all about examining the motivation factor. The Lakers should definitely be the more motivated team going into this game as they will be looking to bring some joy to their home crowd and silence those critics who are saying that they are no longer good enough to be the best in the league. Plus, the revenge factor should kick in as well as they lost the first meeting of the season with Spurs blowing them away with 97-82.

Spurs at Lakers Prediction: We expect the Lakers to come out strong tonight and take the win. Of course, Spurs are a force to be reckon with, but it’s big games like that where Phil Jackson’s men like being involved in and like to win as well.