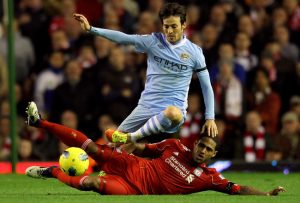 Without a doubt, today’s best football prediction has got to be based on our Man City v Liverpool preview and betting analysis. It’s a massive game for both sides, and with the stakes so high, it’s a really tough call to accurately predict the outcome of this English derby. The Citizens will be looking to bounce back after their shocking defeat just two days ago at the Stadium of Light against Sunderland. Meanwhile, the Reds are pumped up for this one as their iconic captain Steven Gerrard made a goal scoring return during the team’s last game, which was a convincing 3-1 win against Newcastle.

There are a lot of interesting facts about this Man City v Liverpool prediction. First off, Mancini’s men are unbeaten at home this season. Could Liverpool be the team to stop this run? Anything can happen in big derbies like that, so it’s always a good idea to go after the value type of bet, and in this case that would certainly mean backing up Liverpool to win here. Bet365 are offering quite the generous odds for Pool to win at 4.50, while City are favorites at the modest 1.83.

To continue with our Man City v Liverpool prediction for January 3rd, we have to outline the fact that “noisy Manchester neighbors” (as Sir Alex calls City) have recorded two straight draws away from home, but they have an impressive record of 9 straight wins at the Etihad Stadium! Such a run of 9 consecutive victories is bound to end tonight.

Kenny Dalglish has plenty of reasons to be cheerful about going into this Manchester City v Liverpool most accurate prediction. Firstly, he will have his best striker Luiz Suarez back in contention. That’s a massive boost for them, given how unconvincing Carrol has been. As mentioned, other boost is the return of Steve G and his instant impact and play-making ability. 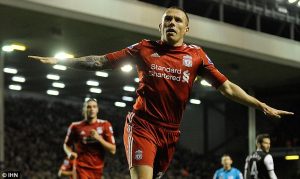 But perhaps an underestimated fact about this City v Pool prediction for January 3rd is the fact that the Reds will be paying tribute to former player Gary Ablett who passed away this last Sunday after fighting non-Hodgkin’s lymphoma disease for 16 months. Ablett was a defender that was actually discovered by none other than Kenny Dalglish during his first stint with the club as a manager. He won two league cups with the club, and also became the only player ever to have won the FA Cup with two different teams (Liverpool and Everrton). It will definitely be a special moment for the Scottish coach and he will be looking to transcend that onto his players, and that’s important in light of our Man City v Liverpool prediction.

Man City v Liverpool Prediction: We are going against all odds again as we expect that the Reds will not lose this one. The double chance on them is a good option, but the Goal/Goal betting pick appears to be the most certain one.