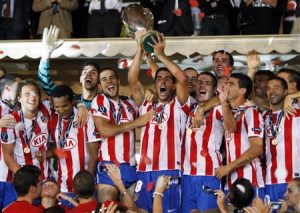 Newly crowned UEFA Super Cup champions Atletico Madrid open their Primera campaign at home against a side that barely escaped relegation last season. Of course, a home win is the main Atletico Madrid v Sporting Gijon prediction, but such late Monday night matches tend to hold a lot of surprises.

Atletico have traditionally been a very unstable side over the years as they have the capability of beating any team in the world, but also lose from even the poorest sides. And that’s exactly what they are going through right now. Last Friday, they stunned Champions League holders Inter with a 2-0 win in Monaco to lift the Super Cup. Goals from Reyes and Aguero proved to be crucial against a strange Inter side that looked as if they didn’t have any real desire and determination to fight. Tonight though, they will be back in domestic business against a modest opposition so we provide you with our  Altetico v Sporting Gijon prediction.

Last season, Atletico Madrid did very well in their cup competitions but were unstable in La Liga. We will see if they have tackled this problem in the new 2010/11 campaign. They finished runners up in the Copa del Rey and won the Europa League, but suffered a lot of losses in the Spanish Primera.

Crucial for an accurate Atletico Madrid v Sporting Gijon prediction would be to analyze the starting lineups for both teams. Obviously, the hosts have the classier players with superior technical skills but will that prove to be enough for them?

Atletico Madrid v Sporting Gijon Prediction: It certainly won’t be an easy match for the hosts at Vicente Calderon, so the best tip here is to bet on Over 2,5 Goals.