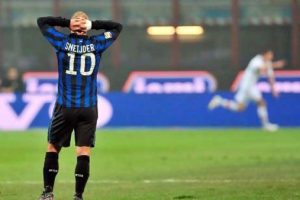 Inter’s miseries this season seem to be endless. At one point in the season, it appeared that Ranieri was the right man who managed to lead the team out of the crisis, but given their results in their last month, their struggles have actually gotten worse. One defeat is followed by another and Inter are now on a terrible run of five losses in a row, while the game prior to that was a 4:4 draw at home against Palermo. What’s even more shocking is that the Nerazzurri have failed to score even a single goal in these defeats. Could things get any worse for them? We are about to reveal the answer in our Inter v Catania prediction.

Do or Die Time for Ranieri and Inter

We are going to be upfront with you here. Our football betting prediction for an Inter win here. If there is one team they could and should be able to beat – that has to be Catania at home. Inter have never lost at home to this opponent generating 15 wins and just one draw in the process. Catania is actually an ex-team for Ranieri who played two seasons there between 1982-84. Inter’s fans will most likely cause serious riot in Milano if their team fails to win yet again. Five defeats in a row, without even a single goal scored is just way too much for a club as big as Inter. It won’t be easy as they really are in a dull moment, but it is simply a must win game for them.

Ranier has called up the following players for this game:

It’s clear that Inter, despite all their troubles, poor form and advanced age of their roster, still has a higher quality linup than Catania, and anything but a win would be a catastrophe. It would be better for Ranier to field a 4-3-3 formation with three attackers that could be between Forlan, Pazzini, Milito and Zarate. Any combination of these three players supplied by Wesley Snejder should provide the necessary goals. Catania had one good player on their team and he was sold to Milan – forward Maxi Lopez.