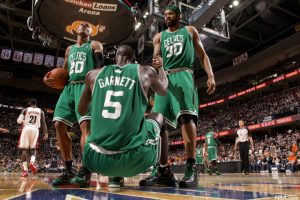 Celtics take on the Cavs tonight as the series switch in Boston. The C’s came out with an impressive Game 2 win right after LeBron James was presented with the MVP trophy for the regular season. This is one of the most physical series in this year’s NBA Playoffs so it was good for both teams they got a 3-day break in between Games 2 and 3. The Cavs were the definite favorites not only to win this series but to go all the way in the Playoffs in 2010. However, after seeing how they lost Game 2, things don’t look so certain and so positive for LeBron and his Cavs. Now they face the though task of having to win away at Boston in order to compensate for the lost home-court advantage.

The Boston Celtics are one of the most experienced teams in the NBA right now and they are as close as a team could get to being labeled as a Playoff team in a sense that they got a solid group of veterans who know all about winning such crucial encounters.

Rajon Rondo had an incredible performance in Game 2 with his 19 assists equaling Bob Cousy’s record for most assists in a postseason game. Of course you can’t expect him to play like that every night but if he does manage to produce over 10 assists, 10+ points and several steals, it will certainly put his Celtics team in pole position to win Game 3. LeBron is still having issues with his right elbow affecting his shot, so that’s another advantage for the Celtics.

Of course a lot for the experienced Boston team depends on how their Big Three plays. Ray Allen exploded in the 3rd quarter in Game 2 as he single-handedly outscored the entire Cavs team. He feels even more comfortable at the Garden where he rarely misses a shot from the 3 point range. Paul Pierce has also got himself going early in these series so that’s another plus for the Celtics. Even KG looks vintage right now as he is making some crucial plays down the stretch for his team.

Glen Davis and Kendrick Perkins are the other big factors for them along with Rasheed Wallace. So the C’s have got a solid presence under the basket making it hard for LeBron to penetrate and score easy dunks and lay ins. Shaq looks neutralized and if that continues to be the case in Game 3, expect the Celtics to take the lead in the series.

Here is the official Game 3 preview by NBA.com:

Cleveland are the better team and they will want to prove tonight that Game 2 was just an incident rather than a trend. LeBron will be extremely motivated to make up for his under par performance during that loss so expect him to hit some big shots in Game 3 and score a lot of points. He will light up the scoreboard plus he is got the support of Jamison, Shaq, Mo Williams, Varejo, Delonte West, and Parker, so we are talking about a great group of top players who should be able to dominate the C’s in Game 3.

BetOnWins Free NBA Pick: LeBron James is going to go ballistic in this game,play through the injury and lead his Cavs to an Away Win tonight! The odds for Cleveland on Money Line are very good as you can literally double your money by betting on them to win. James is probably going to score over 35 points in this game.